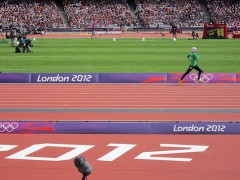 The 2012 London Olympic Games will be remembered as a turning point for female athletes. For the first time all 204 participating nations sent women, moreover, these are the first games in which medals were to women awarded in all sports, including boxing. However, the Games still reveal an inherent disparity between male and female athletes, from sexist media coverage to less sponsorship and fewer medals for women.

Sarah Attar, track and field athlete, one of two female representatives of Saudi Arabia at the Olympics 2012. Photo by gorgeoux on Flickr, CC BY-NC-SA 2.0

The fourth principle of “Olympism,” as defined in the Olympic charter, states that “The practice of sport is a human right. Every individual must have the possibility of practicing sport, without discrimination of any kind”. Yet, the father of the modern Games might be spinning in his grave at the sight of the female athletes competing along with their male counterparts in sports such as weightlifting and boxing

Initially, the French Baron Pierre de Coubertin was against women’s participation, as the Olympics should have been “reserved for the solemn and periodic exaltation of male athleticism with internationalism as a base, loyalty as a means, arts for its setting and female applause for its reward”.  When he resurrected the Games from its ancient ashes, more than a century ago, in Athens, de Coubertin couldn’t predict that in the next version of the Games women would compete in lawn tennis, golf, croquet and sailing (as part of mixed crews). The first women who won an Olympic event were Charlotte Cooper from England, who won the tennis singles title, and Swiss sailor Hélène de Pourtalès, who won a gold medal as part of a sailing team.

Ever since, women have faced significant barriers to participation. The Women and Sport Commission to promote women in sport was only established in 1995 and it only became an official “fully-fledged commission” in March 2004. On the basis of its recommendations, an action program is developed and implemented by the International Olympic Committee (IOC).

In the aftermath of the Beijing Games (with women constituting 42% of all athletes competing) and of the London Games (women making up 44% of the nearly 10,500 athletes), one could say that their mission was completed successfully. Yet this also depends on the sport. For example, the New York Times reported that only 36 female boxers are competing in three weight classes at this summer’s games, compared to 250 male boxers in ten weight classes.

If the mission of increasing female participation was more or less successful in this over a century, coverage by the media remains starkly divergent. At the beginning the “immodestly displayed” unclad athletes’ legs might have provoked Victorian-age prudish reactions from the public. Nowadays women athletes have to cope with rather different remarks about their clothes or their looks in general. Showing some skin, far from provoking negative reactions, elicits extra attention.

Earlier this year the International Volleyball Federation lifted its rule mandating that female beach volleyball players wear teeny-tiny bikini uniforms. The new regulations specify that “a player’s equipment consists of shorts or a bathing suit. A jersey or ‘tank-top’ is optional except when specified in Tournament Regulations.” Yet, the bikinis are still on the volleyball courts: it seems that that’s the secret ingredient which makes women’s volleyball one of the most viewed events. Even the mayor of London, Boris Johnson summed up the appeal of the Olympics citing “semi-naked women glistening like wet otters”. Considering the angle the photographers use while covering this sport, it is indeed hard to see anything else than “glistening bodies”. Journalists at metro.us amused themselves by creating a series of photos of male athletes responding to the question: “What if every Olympic sport was photographed like beach volleyball?”

It’s not only the uniforms that cause a stir: an examination of past Olympic Games coverage showed that when female athletes compete, the sports commentators tend to use adjectives such as “beautiful” or “attractive,” that are completely irrelevant to performance and results. The women athletes are constantly framed by their sexuality and femininity. If their looks don’t match the general beauty criteria, the athletes might face sexism from the media or public itself. Female weightlifter Zoe Smith, 18, was the target of the unflattering sexist comments on Twitter, including: “Your insecurities are kicking in lol. Now pi** off back to the kitchen and make your boyfriend a sandwich he’s hungry.” Leisel Jones, Australian Olympic swimmer, faced critical comments about her weight from the Melbourne-based Herald Sun.

The female athletes from Saudi Arabia, Brunei and Qatar, although fully covered, might face the same criticism back home. While the IOC greeted their participation as great step forward for sex equality, some consider it disrespectful to countries’ tradition.

In Japan, women competitors encountered quite different problems. The Japanese football team Nadeshiko Japan is a semi-professional group of athletes which won the World Cup in Germany in 2011. The male football team celebrated its last Olympic victory in 1968. Yet, the ladies flew to this Olympic Games in economy class, while the gentlemen got first class. The same treatment was reserved for the Australian female basketball team, the Opals. And while the Opals flew in economy, they won silver medals in 2008, while the first class-flying men’s basketball team won nothing.

This was perhaps the most blatant example of sexism concerning unequal pay and recognition. The British silver medal winner cyclist Lizzie Armitstead highlighted the sexism and lack of sponsorships female athletes face. “It can get overwhelming and frustrating, the sexism I’ve experienced in my career, […]. It’s the obvious things: the salary, media coverage, the general things you have to cope with.“

So while at the Games the male athletes fight for the medal, the women fight at the same time for their legitimacy and wider recognition. The gender inequality at the Olympics is just a reflection of the inequality in sports in general.

A real sign of progress of these Games – the most “gender equality-friendly” so far – is definitely the fact that female athletes have been increasingly speaking out about sexism. Furthermore, seeing women athletes on the television during the Olympics might engage the interest of sponsors, broader public and hopefully encourage young girls to participate in the sports still not perceived as “feminine”. If the Games continue to progress, they might bridge the sport gender gap.