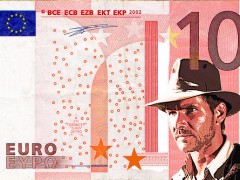 What room is there for culture and cinematography in trade relations? Apparently quite a bit. ( Photo by Stijn Hosdez on Flickr CC BY-NC-ND 2.0)

As a European, a tech geek and a fan of free trade I’m all in favour of the proposed EU-US free trade area. But as with any big agreement there are quite a few caveats to be added: net neutrality activists are claiming that TAFTA is just another backdoor for US business interests to push ACTA/SOPA-like legislation while the lack of transparency and public scrutiny in negotiations has NGOs more than a bit nervous. One issue, however stands out above the rest as a flash point between Europe and America, one that in my opinion illustrates the limits of free trade – the issue of culture.

Now culture is a very volatile concept, one that by all accounts should hold no sway in the rigid language of international trade. And yet, it is a bone of contention in some of biggest treaties out there. NAFTA – which is arguably the most successful trade agreement in history – has special ‘cultural’ clauses allowing the Canadian state to impose quotas and tariffs in order to protect Canadian cultural products. And one of the basic texts of the WTO, the GATT  proposed ‘cultural exemption’ clauses to allow home markets to treat culture differently to other products. More often than not ‘culture’ is actually just code for music and – above all – cinema.

Ideally, the free trade agreement would require EU states to get rid of any subsidies to the entertainment industry for the sake of fair competition, something Europeans are in no hurry to agree to. In fact it is only through such subsidies, both nationally and at the EU level, that European movies still manage to get into theatres. The recently awarded MEDIA prize is only a small part of a significant EU cinema funding scheme that fosters the spread of European cultural products (even ‘depressive’ ones as one of my favourite Romanian intellectuals puts it[RO]) which would not otherwise be able to compete against the tinseltown might of Hollywood glam. National level support is equally important. France, notorious for its rabid support of the French movie industry, is also one of the few countries in the world where anglophone movies do not form the majority[FR] of films screened in cinemas. Other European countries like Denmark or Germany enjoy thriving film industries due to state support and preposterous ‘write-off’ laws that let investors treat any movie investments (regardless of success) as tax-deductions. Then there’s Romania.

Romania is no France or Germany but it is holding its own on the European stage in terms of cinema. The new wave of  Romanian arthouse, often so depressing that it could give the Danes a run for their money, is nonetheless a big hit on the festival circuit from Cannes to Berlin, and even turns a few heads as far away as Sundance. And yet these movies are almost always made at a loss: even the films that pick up international awards and are pushed to popularity on a wave of patriotic pride often fail to turn a profit. So the financial burden rests on ‘goodwill’ investors like large multinationals who are few and far between, and the ever-strained shoulders of the National Cinema Centre (a state-sponsored body with a total budget of around one million euros in a good year).

The NCC doesn’t pick up the tab out of national pride but out of national interest. Movies (and cultural ‘products’ in general) aren’t just goods on the open market. They also serve as cultural signifiers, reflected facets of their home country and cultural ambassadors abroad. Romania, a country with a dismal image in other countries and a bi-polar image at home,  desperately needs movies, Eurovision songs and dance performances to represent it at home and abroad rather than gypsy beggars and welfare fraudsters. Without state support, in a free trade situation, the closest you would ever get to seeing a Romanian on film would be Johnny Weissmuller in Tarzan.