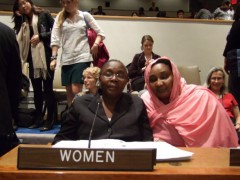 The World Summit on Sustainable Development (2002), the International Conference on Population and Development (1994), the Beijing Declaration and Platform for Action (1995), and the 2005 World Summit all acknowledged the pivotal and important role women play in sustainable development.

However, democratic governments and institutions have yet to draft a policy that addresses the relation between the economy, the environment and their impact on society – and especially on women. As the UN Secretary-General‘s Report notes:

“The challenge of climate change is unlikely to be gender-neutral, as it increases the risk to the most vulnerable and less empowered social groups. In the formulation of global and national approaches, as well as in the strategic responses to specific sectors, gender awareness, substantive analysis and inclusive engagement will be necessary.”

Democracies often deal with the problem of extracting commitments from future politicians by delegating decision-making to quasi-independent bodies managed by officials who are insulated from day-to-day politics. The 1945 revolution in Vietnam, which put an end to the French colonial regime, introduced deep changes in family life, the status of women, child care and education practices. The Constitution of 1946 gave women the same rights as men in political, economic, cultural and social matters.

Poverty is recognized as multi-dimensional with a complex interactive  relationship between its various dimensions. Studies have shown that women experience greater poverty, have heavier time burdens, lower rates of utilization of productive resources and lower literacy rates.

Women and girls, for example, are responsible for gathering stove fuel and producing 60-80 percent of the food in developing countries. According to United Nations, women in Sub-Saharan Africa spend 40 billion hours a year collecting water. They can therefore provide valuable insights when it comes to formulating adaptation policies and implementing projects as fuel and water become ever scarcer and agricultural yields continue to shrink.

Gender disparities exist with respect to access to, and control of, a range of assets including direct and productive assets such as land and credit lines, human capital assets including education and health, and social capital assets such as participation at various levels, legal rights and protection. Lack of start-up capital and resources for any kind of income generation enterprise and lack of labour in smaller households prevent women from escaping poverty.

The first step to making women full participants in adaptation lies in recognizing their value in international environmental and climate negotiations and in supporting advocacy group work. The next is finding concrete ways to integrate women into the planning, development, and execution of climate adaptation strategies for a sustainable future.

Socio-cultural factors continue to hinder gender equality in terms of access to, and use of, services and also contribute to situations such as inequitable allocation of food within the household which leads to malnutrition notably among women and children. Gender- based violence also has important health, economical, political and environmental implications.

Without the uplifting of society,and especially of women in relation to the environment and the rural economy, the objectives of economic policies and planning can never be achieved. Women are likely to be hit harder by climate change than men due to their social roles and the simple fact that a majority—as much as 70 percent—of the world’s poor are women.

Real growth and emancipation can only be achieved if there is a proactive upliftment of the masses from acute poverty, unemployment, and socio-economic backwardness. The rural economy of women can only thrive if there is a potent environmental education policy and empowerment of women who are the major force behind most countries’ economies.

Over the last few years, however, the increasing portfolio of climate solutions has begun to include gender-sensitive approaches and women’s involvement. Observers realize that for climate solutions to truly succeed, women need to be protected, engaged and empowered.

It is essential that governments globally understand the role women can play in the democratic future of their countries and start integrating women in the civil service and private sector in large numbers in order to drive their economies forward and achieve a sustainable balance in all aspects of their economic and environmental well-being.

Women are a largely untapped resource that we must use effectively and justly to combat climate change. They need to be engaged with to prepare communities for the effects of global warming, particularly in developing countries where it will have the most severe impact.

‘We’ cannot afford to underestimate or neglect the role of women in building a sustainable future for the coming generation.

How can we get our women to be more empowered in all frontiers and be actively involved in governmental structures? How can we also ensure sustainable development about the environment and economy which they are mostly affected and the main driving force behind worldwide?