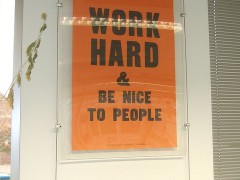 I could not agree less that “the developing world has the potential for major economic growth, but first it must prepare its young people for the burgeoning jobs market.” Lack of proper education is a common problem for developing countries. Will a higher level of education solve the problems of development and economic growth? Is proper education the key to all the issues? I believe not. The issue of job creation in developing countries is much deeper and broader as it also involves irresponsible behavior on the part of employers.

The essence of the problem is not only the lack of education, but also the lack of professionalism and work ethics on the part of both employers and employees. The concept of “appropriate” and “inappropriate” work behavior varies from country to country; cultural and national differences play a crucial role in it.

At the same time, employers exploit the skills of local people and gain large benefits by underpaying them. In this situation young people are not motivated to obtain a proper education, since their salary will remain the same. A young doctor in Cairo, for instance, has to work for the state for several years after graduation. A young specialist has to survive on 150 – 400 Egyptian pounds (25- 66 USD) a month as a sort of a payback for their education. This money is clearly not enough to cover living expenses. Young doctors held protests in 2009 and 2011 asking for better salaries, but their demands were not met, they were simply ignored.

Most young people live with their parents and don’t need to pay rent or buy food. This is why they can quit their jobs easily and rely on their families. This creates an asymmetrical situation when an employer invests in the employee’s education, yet does not appreciate the work that people do, while the employee sees no incentive to be efficient at the workplace and work harder for certain benefits, as such benefits do not exist.

I believe that employers should have a simple sense of social responsibility and subscribe to the principles of fairness. With the market economy in its present state, however, this is most unlikely to happen. The majority of call centers in Europe and all over the world are moving to countries where the labor force is cheaper: Hungary, India and Egypt are some of these places. Factories churning out toxic waste and textile factories are located all over East Asia. This is not due to low levels of education, but rather to cheap labor and lack of human and civil rights in the developing world. At the same time people in the developing world have scant protection from unemployment; trade unions are generally weak and employers can fire anyone on the spot.

Russia might be considered a developing country with its rich capital city and rather poor provinces. There are significant differences in salaries for the same-entry level position between Moscow and any remote town in Russia. The majority of people work illegally and employers frequently neither pay taxes nor provide contracts. Such conditions have caused a brain-drain situation where educated and ambitious young people move to Moscow in their arduous search for better jobs.

The population is growing at an incredible pace which makes finding a job a challenge and increases competition on the job market. Young people frequently find jobs through contact with family friends; in such cases a proper education counts for very little.

So it’s not about the number of jobs to be created for the developing world, but rather about changing the mentality of employers who should provide adequate salaries for people in line with their educational attainment. Just because a multinational company has a branch in the developing world does not mean that the company needs to abandon internationally accepted human rights standards and keep on exploiting its employees. Employees, on the other hand, should show more incentive and higher professionalism. This is a two-sided issue, and even if increasing numbers of people had a university degree, this does not mean it would be solved.