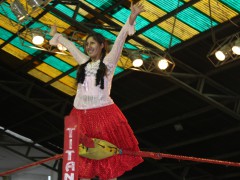 “It’s you who are crazy”: Martha la Altena jeers at the audience for coming to watch the spectacle. CC by Joanna Kozlowska.

The lives and practices of professional female fighters in the Andes

“Bizarre”, “ridiculous”, even “shameful”: these are words that Bolivians repeatedly associate with these women. Yet the lucha libre – wrestling shows starring women from traditional communities in Bolivia – remains one of the country’s most famed tourist attractions. With her folk costume of brightly-coloured cloth and a bowler hat, the cholita is an iconic sight. Add a rush of adrenaline, a shabby sports hall and a furiously enthusiastic crowd, and this certainly beats examining the curiosities in the local market place for entertainment value.

Women, however, don’t strictly belong to the wrestling tradition. The lucha de cholitas was introduced in the 1950s, on the initiative of coach Juan Mamani. “It was his idea for attracting tourists”, says Juan Fabbri, a young La Paz anthropologist. “It’s grown popular with the locals too. What was good for gringos had to be good for us Bolivians.” Although it may be a relatively new phenomenon, the lucha libre has its roots in the Andean past: “In the Andes, a woman had to be strong to survive.” Fabbri explains. “Women performed heavy physical tasks, carried weights and couldn’t hesitate to defend themselves. The delicate woman is a European invention.”

The wrestling hall is packed with tourists and locals alike, the former occupying a row of VIP chairs in the front. The loudspeakers boom out “Eye of the Tiger” by Survivor as the first cholita appears. Graceful in her newly designed outfit, Martha “La Altena” emerges from backstage with her skirts twirling and a swing in her step. She is to fight with a man. “I’ve had a whole family of wrestlers”, Martha says. “I wanted to be strong, just like my father. That’s why I chose the ring. I’m grateful for the opportunity. I think it’s good for Bolivian women.”

Soon after beginning, the fight goes terribly wrong for Martha. Her adversary, a chubby but tough-looking man in a zebra costume, throws her onto the ground. Blood flows. The referee approaches, and his impartiality suddenly disappears. They throw Martha around the ring, kicking her, pulling her legs apart. The audience boos and hisses. Eggs and tomatoes fly onto the ring. “Martha! Martha!” the back rows chant. Martha stands up. The audience applauds. Cheers and shouts increase in volume as a chair lands on the referee’s head. The fight is evidently staged, the inevitable outcome clear to all from the start.

“Sometimes it’s hard”, Martha says after her fight. “Sometimes I’m ashamed to go to the market. I don’t know if I’d encourage my daughters to become luchadoras. But most people support me eventually, and my family stands by me all the time.” Not all wrestlers are so lucky. Martha’s friend Carmen Rosa first became a luchadora to defend herself from an abusive husband. Carmen firmly agrees with Martha that what they are doing is important. The lucha libre simultaneously represents a return to traditional values and an important step in the advancement of women’s rights.

Another fight begins. Both women are household names here, and the audience’s applause is deafening. “What do we call Jennifer?” the announcer shouts. “Loca!” the back rows scream in excitement, cheering and jeering at the same time. “Crazy!” Jennifer enters the ring, wielding a pair of scissors like a medieval sword. “It’s you who are crazy!” she yells at the public. “Coming here! Watching all this! Actually enjoying it. It’s you who are insane!”

Joanna Kozlowska is a member of Global21, a student network of international affairs magazines and a partner of FutureChallenges. A longer version of this article was first published in The Oxonian Globalist.