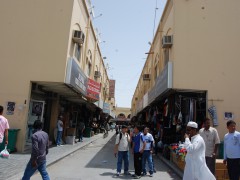 An immigrant district in Doha, Qatar in 2011.

Most of the 5 million Palestinians are refugees. More than two million live in Western Europe and North America. They left Palestine and the refugee camps where they were denied basic human rights to find a better life and better economic opportunities. Most North African Arabs (Egyptians, Moroccans, Tunisians, and Algerians) left their home countries to look for a better economic life. However, Syrian and Lebanese nationals left their countries not only to improve their economic situation but to escape from the ravages of the  ongoing conflicts there.

There are those who fear the loss of cultural identity when confronted with the process of cultural assimilation. Personally, I believe that no institution, government, group or people can clinically separate the young generations from the huge waves of technological advancement that shape and form this global culture which is, after all, part of our new global identity. We are living in the 21st century where social media, street journalism and global trans-national corporations participate in providing a catalyst for the new dynamics of global culture formation, quite apart from the issue of identity which can be defined in terms of religion, culture or language. This signifies that we should not confuse cultural identity with global culture.

However, moving from one side of the world to the other can be an economic challenge for newcomers and host nations alike in places like Western Europe and North America.  When the immigrants arrive, the host country needs to integrate them into the labor market, with the prospect of achieving a better life for them and facilitating their contribution to the economy. This cannot happen in a one-step or one-shop integration program; it needs time, starting from learning the language, integrating culturally with finally, integration into the labor market.  Although in the short-term this strategy may prove costly for the government, in the long, run it will make a positive contribution to the economy. Immigrants however, may find themselves ignored or isolated by society, even though society may see itself as open and immigrant-friendly.  This can be seen in the housing situation where immigrants can rent only from housing agencies and in specific areas. Small enclaves in cities where immigrants are concentrated begin to spring up. Take Rosengård in Malmö, Sweden, for instance, where most immigrants can be found and the crime rate is among the highest in the country. Or Lavapiés, a central historic neighbourhood in Madrid, Spain now home to a high concentration of immigrants from China, Bangladesh and the Middle East. Enclaves such as these can be costly to the government and to the immigrants themselves as life in these neighborhoods often runs parallel to official society and its culture,  and integration is not truly achieved.

Many immigrants have started their own businesses in their new homes. Twenty years ago, you could hardly find Palestinian hummus or falafel in any European markets. Today, there are small entrepreneurs who have set up shops to sell Arabic, Hindi, African, Latin American foods and other products, and there is an increasing amount of trade between these countries.  Spice exports from India to Saudi Arabia has increased the total sum of economic trade to 80 billion Saudi Riyals.  This is not because of the sheer quality of Indian spices, but because of the numbers of Indians who live in Saudi Arabia- naturally for economic reasons.  Trade between Turkey and Germany has reached the 25 billion euro mark and the number of German tourists to Turkey is an estimated 4 million. This illustrates how the existence of immigrants can foster economics at different magnitudes of scale.

Personally, I had the chance to meet many immigrants who were all willing to integrate in the Swedish and Spanish societies where they live. Admittedly, there are many constraints at play, but these constraints are not related to any loss of identity.  In fact, Western societies’ creation of immigrant enclaves enables neighbours to share similar identities, cultures, language and perhaps even religion.  This however, has a negative effect in the long run, and it will be the second generation and the government who in the end will pay dearly. Integration programs do not fail because immigrants are unwilling to be part of the new society, but because society does not open its doors fully to allow them to integrate. Full integration could be costly at first, but at the end of the day it is an investment in the future. Currently, many schools in Sweden are teaching Arabic as a second language for immigrants and provide students with halal food. Any argument about loss of identity in the West does not have a solid foundation.

Countless benefits come from integrating into society. It means that people will focus more on economic opportunities rather than concentrating their efforts on lamenting a so-called identity crisis. And it means they will become sensitized to the norms and standards of the new society – its garbage collection, its traffic lights, its highway code etc. – and start to adopt new ways of thinking. The new generation will have the opportunity of boarding the ship of civilization and development that Arabs have lost a long time ago. They will have equal opportunities in learning, engagement and self-esteem. Afterwards, they can be a solid bridge between the two cultures or religions – of course, with mutual understanding. On the other hand, the receiving countries will enhance their economic opportunities where immigrants come from. The number of multinational corporations and businesses are increasing because of the increasing number of immigrants in the receiving countries.   This will boost an economic, political and cultural interaction between the two sides. Governments of Europe and North America should start their integration programs by encouraging newcomers to establish their own businesses that link them to their homeland. This will make it easier to understand, smoothly integrate and contribute to the economy.

Finally, we must admit that if we do not run in concordance with global culture, it will eventually usurp us without our even knowing it. The cost of isolation and non-convergence is higher and more damaging than integration. The fear of losing identity must be faced with positive interaction between newcomers and their hosting societies. In the end, most newcomers are guests and must leave a positive impression when they leave, or they are part of this society and they must adapt with it and build their future in conjunction with their new surroundings.