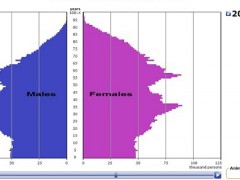 What would you do with a country where you have a very generous healthcare system, an aging society and a pretty complicated economic situation?

Hungary is well known as a country on its way to embracing Western European standards in terms of social security and economic success. A lesser known fact is that its healthcare system is more generous than the average European model. Basically everybody in the country is insured, and significant groups (children, students, pensioners etc.) have free health insurance. Nor do you pay your own insurance, because the system is financed through taxation, so-called “healthcare contributions”. If you are employed, these are paid by your employer. Unemployed? Don’t worry, you’ll still be insured for a while! An entrepreneur? Please pay your share – around 22 Euros a month… (see here for more details about the Hungarian healthcare system).

Who benefits from this system? Look at the chart below which gives details of the population of Hungary:

The population of Hungary by sex and age, January 1, 2012. Source: Hungarian Central Statistical Office. See it full-size and try the time-animation here.

The pyramid shows an aging population which is costly to finance: obviously elderly people need to see their doctors more often. What’s more, pensioners enjoy all healthcare services for free, which leads to the temptation to overuse an already overburdened system. Could it be then that the system is too generous.

How can we improve the situation?

Could we, for example, somehow reduce the number of patients? Could we encourage people to go to doctor only in cases when they really need to? A logical way to do this would be to make them pay for the visit. However, this is not likely to happen. As most of the patients are voters as well, any party that took such action would definitely lose out at the next elections. And no government would want to risk that.

In 2007, the government then in power gave it a try and introduced a co-payment system where patients had to pay around one Euro per visit. It proved a total failure with administrative costs far exceeding actual income, and the whole plan was finally swept away in the “social referendum” held in March 2008.

Another possible solution would be to increase the number of doctors. However, things aren’t moving in that direction unfortunately. On the contratry, the healthcare system is already being depleted with large numbers of professionals leaving it to emmigrate to other countries, and now, to make things worse, a recent government decision risks endangering it even more as retired doctors may drop out of the system as well. Let me explain.

In December 2012, a government decision was made to retire state employees over the age of 62. After all, there is no money to pay your salary and your pension at the same time, so you’d better retire. If you want to continue working, please ask the government (!) if you are allowed to do so, but then kiss your pension goodbye, at least for the time you remain in employment.

As healthcare is not privatized in Hungary, this applies to doctors and nurses as well, no matter how extreme the shortage of labor in this field might be. This means the loss of yet more thousands of healthcare workers (the exact data is unknown) in a country of ten million.

If these doctors do retire, some hospitals will have to close down. Although this move could save money for the government, it is definitely not a good solution to rebalance the ratio of doctors and patients in the healthcare system.