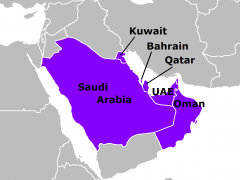 The Gulf Monarchies have formed a supra-national organization, the Gulf Cooperation Council. Photo by SpLoT at en.wikipedia.org

The Arab Spring uprisings have triggered notable shifts throughout republican Arab states. The story in the Gulf monarchies, however, is starkly different.

The Gulf Monarchies are, for the most part, autocratic, hydrocarbon-rich states whose regimes derive legitimacy from tradition and an inflated ability to pacify populations through the distribution of petrol dollars. But brutal suppression in Bahrain and escalated calls for reform within Saudi Arabia itself have cast doubt on that assumption.

In March 2011, barely one month after protests had begun in Manama, Bahrain, the Sunni monarchy invited Saudi troops to help suppress their restive Shiite population. Saudi Arabia swiftly deployed its military, fearing incitation of its own Shiite population. Manama’s Pearl Roundabout, previously the hub of protest activities, was destroyed that same month, and numerous protesters were killed, but groups have continued the protests, clashing with police throughout the spring and summer months of 2012.

Likewise in Saudi Arabia, calls for reform have escalated. A 65-year old man self-immolated in protest on January 21, 2011 and Faisal Ahmed Abul-Ahad, a protest coordinator on Facebook, was allegedly murdered by Saudi security forces before his planned “Day of Rage” protest in March 2011. In April 2012, Saudi Princess Basma bint Saud bin Abdulaziz created a firestorm by publishing an article which proposed reforms of Saudi Arabia’s constitution, social services, and chaperone laws.

By muting and suppressing these acts of protest, the Saudi regime may be dooming itself to a generation of increasing irrelevance when it comes to matters of civic leadership and ideological reform in the Arab world, as are monarchies in Oman, Saudi Arabia, and Kuwait.

This perception will prove increasingly problematic for the Gulf monarchies as their political and strategic positioning in the region becomes less secure, especially with Turkey’s emergence as an economic heavyweight in the region.

The relationship that the Gulf monarchies have with the West will also come under increasing scrutiny as energy diversification and oil discoveries in other parts of the world mean developed nations will no longer have to depend so heavily on petroleum exports from the Gulf states. The episode in Bahrain also revealed the increasing cost of maintaining close relationships with the Gulf monarchies, as seen from how the US’s silence on the suppression, while part of a pragmatic ploy to maintain a stable port for its 5th Fleet, casts doubts on its democratic credibility during the Arab Spring.

If transitioning Arab republics such as Qatar manage their governments and economies in a productive manner, they may be able to isolate the Gulf monarchies using their influence as the main movers and shakers in the region. This means that if the Gulf monarchies fail to reform, they may find themselves being marginalised in a part of the world whose evolution has rendered them redundant. The Arab Spring may have signalled the beginning of the end of the powerful petrol monarchies in the Gulf.

Morenibayo Bankole is a member of Global21, a student network of international affairs magazines and a partner of FutureChallenges. A longer version of this article was first published in The Oxonian Globalist.