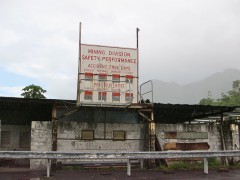 It’s been almost fifteen years since the end of the civil war and the landowners on the island of Bougainville in Papua New Guinea (PNG) are discussing the return of the mining giant Rio Tinto.

Rio’s infamous Panguna mine, owned by its subsidiary Bougainville Copper Limited (BCL) was at the centre of the decade-long conflict that claimed thousands of lives, often referred to as the Bougainville Civil War.

The Bougainville civil war began in 1988 and was the most serious conflict in the South Pacific since the Second World War. It is estimated that between 15,000 and 20,000 people were killed directly or indirectly by the conflict, and at its peak, 70,000 of the country’s 180,000 people were displaced.

With such a devastating past, the reopening of the Panguna mine is not a decision that the people of Bougainville will be making in haste. The mine may be what the islanders need to gain independence but they certainly do not want any bloodshed.

As the landowners debate the possibility of Rio’s return, it’s important to remember the factors that contributed to the conflict. What really caused the conflict in one of the most peaceful parts of world? Was it politics, culture or something else?

The truth is there was no single cause for the conflict. Multiple factors were at play, including ethnic identity, political independence, colonialism, environmental impact and social exploitation. However, all these factors had one thing in common: the Panguna mine.

Abandoned facilities and the remnants of a former mine, Panguna, Bougainville, PNG by madlemurs on Flickr CC BY NC-ND 2.0

BCL began its operations on the island in 1972 until the outbreak of the civil war in 1988. During this time, the islanders raised concerns over the mine’s environmental practices, royalties to landowners and treatment of local workers.  BCL was accused of causing significant environmental damage, namely dumping of the mine tailings into the Jaba River, which was believed to be causing birth defects in babies. BCL was also questioned over its alleged enforcement of an apartheid-style system, in which the islanders received inferior treatment compared to the white workers.

The islanders also felt that they were not getting a fair share of the mining profits – and they were right. The PNG Government struck a deal with Rio Tinto to receive 20% share of profits generated by the Panguna mine. The Bougainvilleans on the other hand, received less than 1.25% of the total profit from the mine.

Disgusted by what was going on, Francis Ona resigned from his job at the mine and with his cousin Perpetua Serero formed the Bougainville Revolutionary Army (BRA).  BRA orchestrated attacks on the mine in the form of arson, vandalism and sabotage, which led to the decision of the PNG Government to send in its defence force to the island in 1988. The PNG Government continues to claim that it took para-military action under the direct orders of Rio Tinto.

What we can learn from what happened in Bougainville is that conflict stems from a multitude of injustices that deny people of their human rights. Rights to be treated with respect and dignity, rights to equality, rights to participation, rights to fair and safe employment conditions and rights to land and natural resources are among the set of rights that all individuals are entitled to and are born with.

Just as there are multiple injustices that may contribute to a conflict, there are multiple actors that may incite conflict. What the experience from Bougainville should teach us is that the responsibility of promoting and protecting human rights is not to be fulfilled by governments alone but by all institutions in society including multinational companies like Rio Tinto. This responsibility also extends to individuals, families and communities – we all have a role to play in defending human rights and in turn, promoting fairness, equality and peace.

The mine may help restore the island’s economy and support its path to political independence but its connection to the South Pacific’s bloodiest civil war and brutal abuses of human rights cannot be forgotten. Will there be hope and peace for the Autonomous Region of Bougainville and workable solutions with Rio Tinto?