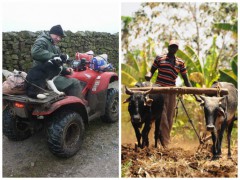 Apartment blocks in Panama. Photo by Nicholas Jones on Flickr. CC BY 2.0

With all due respect to Mr. Hollande, not only is the crisis not yet over, but, as Mr. Piñera said, the best is yet to come.

Latin American, which has long been considered a financial disaster zone, has turned round and given this traditional perception the lie. The unprecedented stability and prosperity of this region has its roots in a thriving middle class (which guarantees robust domestic demand), sensible governance (committed to wise central banking) and fiscal stimulus packages, but also in the internalization of macroeconomic prudence which has been learned through some pretty hard lessons.

Low inflation, good fiscal accounts and healthy international reserves have become an integral part of the Latin American vocabulary, and exclude use of the “austerity” word. Yet the adjustment process, followed from 1982 to 1987 and best described as an IMF emergency stabilization plan, has been extremely costly.  It included not only expenditure cuts, but also focused on economic outputs, direct exports and extraction of resources, lifting import and export restrictions, balancing budgets, removing price controls and state subsidies, and the privatization of state-owned enterprises.

This last item was one of the most controversial and generated great resistance among the people. In 1997, Brazil faced numerous violent demonstrations against the privatization of Vale, a mining corporation. In general, as in the Vale case, companies were sold below their market value and with little transparency in the process, . Unfortunately the measure  of combating corruption proposed by the IMF did not seem as essential as economic austerity measures, and only in June 2013 did the Brazilian court recognize that fraud had been committed in the privatization of the company.

On the other hand, during all this time, Europe was sinking into a morass  of self-centeredness, one of whose most glaring aspects was the widespread sense of complacent self-satisfaction which immured Europeans in a bubble of comfort and nurtured a new detached, apathetic generation, indifferent to the problems of the planet.

The obvious inability of most ordinary citizens of the so-called “first world” to feel any responsibility for the fate of “the rest of the world” exonerates me as a Brazilian, a Latin American, a third world citizen and a global citizen of feeling guilty about my lack of solidarity for Europeans in the difficult times of austerity they are now traversing, especially because austerity is relative, and at the moment is measured and felt by first-world terms alone.

The discrepant routines of a farmer from North Yorkshire, Great Britain and one from Farmer in Kabaune Village, Kenya.
Photo 1 “The farmer’s best friend?” by Karl and Ali on geograph.org.uk. CC BY-SA 2.0 | Photo 2 “Kenya – Kabaune village (Giaki)” by CGIAR Climate on Flickr. CC BY-NC-SA 2.0

The old instruments traditionally used in Europe for consolidating public finances have proven to be inadequate and obsolete. Far from solving the debt crisis as promised, current fiscal consolidation plans have lead to a rise of the government debt-to-GDP ratio in the eurozone (from 88.2% to 92.2%) compared with the first quarter of 2012, according to Eurostat.

According to the Centre for Economic and Business Research (CEBR), the outlook is particularly calamitous in Greece, Italy, and Spain, with  extremely gloomy prospects for economic growth. Among the member states of the eurozone, the highest unemployment rates were recorded in Spain (26.9%) and Greece (26.8%) in March 2013. In May, the highest rates of unemployed young people were in Greece (59.2%), Spain (56.5%) and Portugal (42.1%).

In its search for new solutions, the old continent is hindered by self-inflicted restrictions. If trade is now to be a major impetus for job creation, this means establishing new alliances that break with the present international structure of commerce that only thrives at the expense of the underdevelopment of some out-of-sight region.

What we all (“the rest of the world” is included here for a change) need is not only free trade in products and services, but also free trade in labor and knowledge.

Yet we still lack a genuinely global identity. Despite all the bonds that link us, international solidarity still faces some bad ingrained modes of thinking. Why is European society so much more appalled by a train wreck in Spain than by the massacre of people protesting against sexual violence in Egypt? Europeans are well aware of the existence of such miserable conditions, but do not think about them and do not care. Not because of ignorance, but because of lack of empathy.

None of their austerity measures can come close to putting European workers in a similar situation to the one now experienced by Brazilian workers with their precarious and hard-won guarantees. To understand why Europeans have become such freeloaders, you only have to look at the different ways citizens interpret the economic performance of their countries: while the May 2013 unemployment figures for Austria (4.7%) and Germany (5.3%) were a major cause for concern in Europe, despite being the lowest in the eurozone, even worse performances by Latin American countries like Chile (6.4%), Brasil (6.0%) and Uruguay (6.3%) are considered fully acceptable by the people.

Although it seems like a joke, it is not. It’s just another reason why I just can’t get worked up about European workers’ standard of living when I have “the rest of the world” as a benchmark of comparison. The 2008 crisis will only be fully overcome when every human on the planet adopts new patterns of consumption and global empathy.

My humble advice to Europe is: get off your high horse, before it stumbles and throws you. The more advanced social development and connectivity in the “rest of the world” becomes, the less will be our willingness to serve as pawns in European economic games. After all, we want to be as much the protagonists of our own fate as everyone else.

Europe should learn its “Latin lessons” as soon as possible and start working on more effective and decisive solutions. A few scattered austerity measures won’t be enough. More consistent fiscal policies and aggressive public finance cuts are needed to bring back balance to the global economy. Of course, it means breaking up the development and economic welfare of the region, and I’m sure this  won’t seem as funny as it was when it happened to somebody else.  But the blogger Luís Felipe Morgado put it well in his last post when he wrote, it shall be easier this time, since “Latin American served as a laboratory for improving our economic understanding of debt crises.” Europe should do what has to be done as soon as possible. In the long run a “lost decade” is little in comparison with the scary scenarios that Europeans are just starting to glimpse on their horizon.

European politicians should learn to relinquish the protectionism which worked so well in the past but in the present is just  holding them back. I know that giving up old traditions can be hard, but it is crystal clear that they aren’t working anymore. I am not proposing that they should do exactly the same as Latin America did, but I am asking them to learn from Latin America how to bring more dynamism and flexibility to their economies, or simply to learn to swim with the global streams and go with the “global flow”

The European Union will still need a lot of humility to overcome the domino effects of the 2008 crisis. But the high standard of European social welfare has cost the rest of the world dearly. Internal equality and high standards of living have only been made possible by maintaining inequalities in relation to the “rest of the world”. The sooner Europeans realize this, the better.