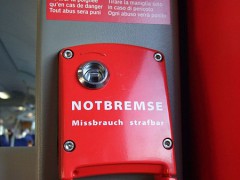 I do believe in the broader European Union including almost everything that comes with it. That also means that I uphold the idea of solidarity among members of the EU. Solidarity, however, is not supposed to be lopsided. Take a closer look at recent developments and the financial support given within the Union, and you can easily get the impression that solidarity is a one-way street since money is transferred largely from the north to the south and not the other way around. That money cannot be transferred back is in the way of things given the highly indebted nature of southern European countries.

Asking a country to meet certain conditions such as financial consolidation in return for large sums of money should not be asking too much. This is a characteristic of solidarity as well – expressing gratitude for being bailed out and sticking to the austerity measures you promised.

Should austerity be pursued for the sake of future generations? Photo taken by Jared Preston (CC BY SA 3.0)

What is not solidarity is that the southern European countries in question are only halfheartedly complying with what they should be doing in order to bring their budgets under control again. Full compliance would be an act of solidarity with countries like Germany (the biggest net payer within the EU) and would help them maintain their own policy of savings. After all, it’s not as though Germany has achieved its present relatively comfortable economic status without efforts and struggles. Ever since the introduction of Schröder’s Agenda 2010, Germany has consistently focussed on making savings and consolidating its budget. So it’s only fair not to ask countries which have done their economic homework to give up what they have gained by letting other countries get away with mismanagement.

Nor is it fair of course to punish the people who have to bear the brunt of rigid austerity policies but who are not responsible for the miserable situation politicians have maneuvered them into. But neither are taxpayers in more responsible countries. Why should they be paying for the financial misery of countries which have been living beyond their means for many years while others have had to make huge sacrifices? This is not to say that helping out our EU partners in need is the wrong approach – on the contrary. We are a union based on common values. One of them is, and should still be, solidarity.

Cherishing these values also means that bail outs should be restricted to a certain extent.

And that extent is certainly reached when economizing countries run the risk of wasting their savings (like those made through reforms like the Agenda 2010) to bail out countries who don’t have the discipline to get their act together.

The money saved on bail outs should instead be used to serve future generations in terms of not burdening them with debts too enormous ever to be paid back in their or their children’s lifetime.  Now is the time to continue reducing our towering mountains of debt which amount to 81.9 % of GDP in Germany alone. The picture in most southern EU states is even dimmer: average government debt within the European debt mountain adds up to 85.3 % of GDP with Greece clocking in last (156.9 %).

These figures should send a clear warning to stop increasing today’s (government) spending at the cost of future generations.

Now is the time to consolidate our budgets in order not only to give our children a chance to enjoy a standard of living akin to our own instead of being crushed under tons of debt and increased taxes. Putting an end to life on credit and getting national budgets straight again would also help to strengthen financial credibility, and thus attract investment to get economic growth back on track. This would be a great benefit to all EU states, not only in economic but in political terms as well.