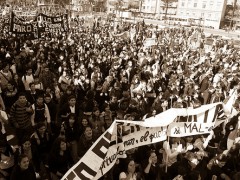 Winter is back and so are the student protesters. Waving banners and flags on a 3-mile long gathering, they marched through Santiago in the heavy rains this last week of June 2012.

2011 was a year of turmoil across the globe and Chile was no exception as student leaders mobilized thousands on the streets of the capital Santiago demanding a total overhaul of the education system. This was the latest of a wave of protests that have taken the country’s main cities hostage, and also spawned various violent incidents. Schools and colleges were closed for months as the government and student leaders conducted round after unsuccessful round of negotiations.

After a long silence, the protesters are back in this harsh Chilean winter with the same agenda, calling for the end of the public financing of private universities and for empowerment of the public education system.
Such a noble cause – free education for all – who would not support it?

Students protesting in Santiago by Dave_B_ on Flickr, (CC BY 2.0).

Education in Chile is one of the biggest financial outlays anyone can make. Like all other Chileans it was a hard time for me as well when I had to work just to pay for my education.

Most parents cannot afford higher education for their children. Almost everyone has to take out a loan to pay for their university degrees. According to the Organization of Cooperation and Economic Development, fees in Chilean universities are proportionally the most expensive in the world, $3,400 a year in a country where the average annual salary is about $8,500. What’s more, a CEP paper by Sergio Urzúa, an economist at the University of Maryland, estimates that 39% of those who graduate will find that their salaries do not compensate for the cost of their courses.

Ever since the Pinochet era, a significant number of the privately owned universities and institutes have operated in Chile. The government provides financial support for these institutions in a variety of ways, while very few public institutes have been established and government aid to them is negligible. This has resulted in widespread dissatisfaction among students who demand a restructuring of the whole education system which they believe should be based on the right to free education for all.

Yet even so, this fascinating idea is easier said than done. In an export-based economy like Chile where government revenues are dependent on the state of markets, the outlook is grim given the situation in Europe and on other big markets. Piñera’s government might have sacked the education minister and offered an education package of $ 700 million, but its offer was turned down by student leaders who called it insufficient.

Considering the current situation in Chile, there is some likelihood that the government will bow to student pressure and accept their demands. However, whether this will do any good to Chile as a country remains debatable.

Merely allocating such a huge budget to education might not be helpful. Take the example of Argentina where funds spent per student are double those of any other Latin American country, and where the education system still faces issues like the low number of students graduating from state universities. Apart from managing the government supported education system and keeping it efficient so that all social levels can have equal opportunities, we also need to think about the sustainability of such reforms. Making higher education free for all will put a tremendous pressure on the economy.

Although it is clear that education is a very long-term investment which bears fruit when the government invests in its people, keeping this up in the long run is certainly not easy. Financial pressure on the country’s economy can backfire at any time bringing down the whole local economic system. What happened in Finland should be prevented for happening in Chile. Finland has an admirable public education system where all schools, colleges and universities are government-run. Yet as students do not pay any fees and can even receive scholarships and other grants,  unemployment among educated people has become a chronic problem. Not to mention that the pressure of government subsidies on the country’s economy has brought Finland to the verge of the bankruptcy.

In 2010, the Chilean Instituto Nacional de Estadísticas stated that half of the students enrolled in a university don’t finish their courses, costing the state US$ 4,500 per student. I think this goes to show that providing free education for all puts a considerable strain on the economy and opens the door to government subsidies for undeserving candidates as well.  I think that the Chilean government should try to formulate an education policy based on social-economic levels which provides people with special benefits in terms of scholarships and special quotas in prime institutes (public and private alike). In this way, representation of poor students in prime institutes will increase and in the long term also enable them to enhance their economic status. Student leaders who are unwilling to accept any terms other than 100% free education for all should not be adamant about their demands, as after all they are our future national leaders and need to widen their point of view and consider the downside of their demands as well.

Yet no matter how the future unfolds, it is important that we should not lose sight of the bigger vision of a prosperous country and that we all work together to achieve it.