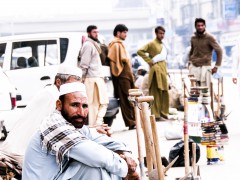 It’s not unusual to hear of people migrating from Pakistan; even people who know little of the country – except that it exists, and they should be afraid of it! – know a Pakistani migrant or two. However, what few people know – correction, what almost no one knows – is that Pakistan itself is also home to a thriving population of immigrants. Yes we can play that game too; it’s not just you who can do it, Mr. Developed World. And no, this isn’t a reference to Pakistan’s import of jihadis from nearby unassuming peaceful states like Uzbekistan, Tajikistan, Kazakhistan, et al.

In fact it’s refering to Pakistan’s 2.7 million guests, imported and hosted from Afghanistan for over 30 years. Interestingly, at one point this figure stood at well over 5 million migrants as recently as 2001. These Afghan guests are to Pakistanis what Pakistanis themselves, or even Bangladeshis, or Sri Lankans are to… say Americans or Western Europeans: second or third class citizens.

And they do the same kind of work. An Afghan hawks food on the streets of Karachi, a Pakistani hawks food on the streets of New York; an Afghan burns himself all day in the blistering heat of a Lahore summer in menial labor; a Pakistani withstands the cold evenings of Amsterdam in a similar menial job; an Afghan drives a cab in Islamabad, and a Pakistani too drives a cab, only in central London. But the enduring truth remains that the Afghans are our Pakistanis.

These ‘displaced’ immigrants face the same challenges in Pakistan that the Pakistani diaspora faces abroad in the ‘developed’ west. At least in this we can claim parity with our more ‘developed’, ‘first world’ brethren. And unfortunately the identity crisis faced by these Afghan men and women is no different to that faced by Pakistanis themselves abroad.

When a Pakistani goes abroad, especially to the USA, he or she is never the same when they return. To their native brethren, they have become “Amrika Palt” (American Returnees) – and they can no longer be viewed as they were when they left: their opinions become irrelevant, because they “don’t know what we go through here every day, so they don’t have the right to an opinion about us.” Back in the USA, they’re just “more of those bloody terrorists, here to take away even our service industry jobs now!” And if they’re unfortunate enough to end up working in Vilayat (England), then they’re “the scroungers who steal our social welfare benefits.”

God (whichever permutation you might believe in) forbid, if they end up staying abroad, and making the mistake of raising a family there. Then, they’re “the ones who just won’t leave, and keep trying to become as white as we are.” Back home, they’re given the title of ABCDs, or American Born Confused Desis (natives), and no one takes these poor foreign-born men and women seriously – because they’re “confused”, and don’t have any real cultural identity since they’re both here, there, and nowhere at all in particular. In traditional Islamic mythology, there is a phenomenon that precisely describes this: succeeding the state of having passed on from the physical world but preceding the afterlife, it is the state of being neither here nor there, but in limbo, somewhere in between the two: the state of Barzakh.

Unbelievable and preposterous as it may sound, Pakistan is the Barzakh of 2.7 million Afghans. They go through everything that the Pakistanis go through, all across the world, in just one small patch of land. Yes, we’re special like that. So the Afghans who choose to remain here lose their cultural identities outside of the ugly truths that this Barzakh carves out for them, and those who return are left with none either. And the tragedy is: no one cares.

A perennial student, I'm always exploring, and though the journey isn't always pleasant, you come out a better person in the end - an outspoken writer by passion, an architectural design student by profession.