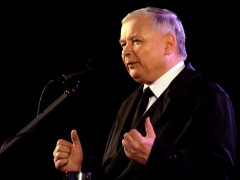 ‘Ladies and Gentlemen, I am deeply convinced that the day of our success will come, that Warsaw will be like Budapest.’

Jarosław Kaczyński in April 2012. Photo by Piotr Drabik (DrabikPany) via Flickr CC BY 2.0

Jarosław Kaczyński, the leader of the Law and Justice party, the main opposition group in Poland, is well known for his strong language. A divisive figure, whom over half the respondents in a recent opinion poll consider untrustworthy, he still remains one of the most charismatic politicians outside the ruling coalition. Yet for the past 7 years all this has not been enough for him to score a single victory in any of the 6 elections that have been held. Can this change?

Hopes remain high for Mr Kaczyński and for his solid 25% strong ‘iron’ electorate. For them Victor Orbán’s 2010 landslide victory serves as an inspiration – and a pattern many of his supporters would like to see replicated in Poland. They anticipate growing popular dissatisfaction with the ruling coalition. Its tenure, marked by various affairs and scandals, is expected to terminate in mass protests and an eventual change of government – perhaps even with early elections, while some domestic commentators ponder the possibility of ‘the Hungarian scenario’.

However, the leader of Law and Justice is not the only Polish politician to sympathise with Mr Orban. The Prime Minister Donald Tusk has repeatedly supported his Hungarian counterpart on the European stage and their relations are nothing short of genuinely friendly. Although some eyebrows might have been raised last January when he argued that Hungary upheld ‘European standards of democracy’.

PMs Tusk and Orban in July 2011. Photo by Grzegorz Rogiński/Chancellery of the PM of Poland via Flickr CC BY-NC-ND 2.0

To return to Mr Kaczyński, he continues to look up to his Hungarian idol, recently saying with pride and admiration that ‘Orbán is implementing policies identical to the Law and Justice programme’. The popular view is largely indifferent to goings-on in Hungarian politics (although the controversial media law reform of December 2010 sparked a passing wave of criticism among Polish papers lead by the influential ‘Gazeta Wyborcza’ daily). As the well-known couplet goes: Pole and Hungarian — two good friends, // joint fights and drinking are their ends. The tradition does not mention resistance to authoritarian tendencies.

So will the ‘Hungarian scenario’ play out in Warsaw after all? Well, it seems rather improbable, at least not with Jarosław Kaczyński starring as Viktor Orbán. Law and Justice have repeatedly failed to extend their electoral base beyond small town and hinterland nationalist Catholic conservatives (although recent opinion polls do show a sudden spike in popularity among the youth). Mr Kaczyński remains highly unpopular as a potential PM while his position within his party is largely uncontested. And most commentators agree that without a change at the helm, Law and Justice stands no real chance of winning any elections.

However, this coming autumn and winter are bound to bring some new and probably vigourous developments. The ruling coalition has had a few fires to put out – most recently the Amber Gold scandal – and more are likely to ignite. Economic prospects are rather grim, with a major slowdown expected next year along with rising unemployment. The raising of the retirement age, approved earlier this year, remains a highly controversial issue for many people. And the last twelve or so months have shown the potential of street politics – with a major right-wing mass rally on National Day in November 2011 as well as netizen-coordinated protests against ACTA in January and February 2012. As has often been the case in this part of Europe,  you can probably expect the unexpected.

An alumnus of the LSE and the NUS. A social scientist by training, a political junkie by conviction. Currently working for Polityka Insight, a Warsaw-based centre for policy analysis, where I cover issues ranging from health policy to pension reforms. I previously worked for the Chancellery of the Prime Minister of Poland as well as the Ministry of Administration and Digital Affairs.