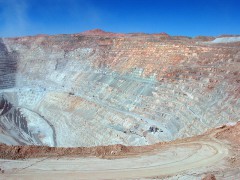 Can an economic model to support future generations of Chileans be based on a nonrenewable natural resource?  Or will it become yet another example of the resource curse?

For the last 150 years copper has been the backbone of the Chilean economy. Chile has been able to defeat underdevelopment and achieve macro-economic stability with reliable foreign exchange from copper exports. In spite of its troubled history of economic diversification, political unrest and in spite of being a small sized resource-based open economy, Chile has indeed managed to to travel the road to prosperity.

Chuquicamata; the biggest open pit copper mine in the world, photo by Petirrojo.

How it all began:

After independence in 1818 the Chilean economy took off: mineral exports have always been the mainstay of its budget. The period from 1950 to the Chilean coup of the 70’s is known as the period of lowest economic growth resulting in a major crisis and the 1973 military junta. It was the time when the copper mines were nationalized in Chile. The military regime introduced many economic reforms which were deepened by successive democratic governments. In 1976 the government formed the unified state owned company Corporación Nacional del Cobre de Chile (CODELCO) to consolidate the administration of copper extraction. In the following decade Chile established a Copper Stabilization Fund (CSF). This fund is used to take the windfall profits from copper exports to cushion  market instability and reduce public debt.

The liberal economic policies of the Chilean government created a favorable investment climate and CODELCO entered into many partnerships with local and international companies. Chile has used the revenue from copper exports for development in mining as well as for supporting industries such as manufacturing of heavy mining equipment which is exported to many European, Latin and North American countries.

In addition, revenue from copper has also been used for the development of other industries such as fisheries, forestry and the agro-industrial sector with products like wines which have fuelled the growth of exports. Fruit export from Chile is another sector where such great progress has been seen that Chile is now one of the largest fruit exporters in the world. Such economic developments made it one of the most financially stable economies in Latin America and Chile is classified by the World Bank as an upper-middle-income developing country.

High income brings higher risk; as national income increases the signs of the Dutch Disease start appearing like high inflation, set backs  to domestic industries such as manufacturing and agriculture, and higher exchange rates which exacerbate the situation by increasing the price of domestic products while making imports cheaper. Farsighted policy-making is the only way to cure the Dutch Disease.

The Chilean government has always taken precautions against such  negative effects of a resource-oriented economic model. Agriculture has been promoted, and de-industrialization prevented as the government is careful to promote newer sectors like agro-products, tourism and IT. As the Start-Up Chile initiative brilliantly shows, Chile is committed to grooming the new generation of Chileans to become entrepreneurs. Higher dollar inflow is certainly putting pressure on the local currency, thus Chile has requested that future loans from Inter-American Development Bank be paid in pesos.

To properly consolidate economic stability more attention needs to be devoted to micro-economic issues which need addressing at the grass root level by investing in education and giving tax rebates to the domestic private sector.

The future of Chilean copper looks bright with huge untapped mineral deposits, enough to continue producing at present rate for the next 100 years while demand from China and India will drive up copper prices as these two Asian giants grow in strength. However, economic slowdown in the USA is a major concern. The other two major challenges are internal – energy and water, both of which are essential for copper extraction. As the grade of mineral drops, extraction becomes ever more energy-intensive which is a big challenge to face for an energy-starved country like Chile. Similarly, water is an important ingredient in copper extraction but is very scarce in the north of the country. More research and investment are needed to sustain water resources.

On the whole Chile has shown to the world that if a prescient approach is taken the resource curse is by no means inevitable and the Dutch Disease can be cured.