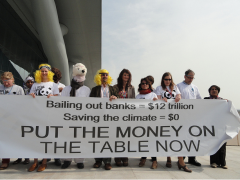 Since the very first moment I opened my eyes in this world, I remember financial crisis existing in my common surroundings. Crisis in my home country of Mexico, crisis in my hometown, and crisis in my family. Sadly, this tiny word that causes a lot of hassle exists in almost every issue you can think of today, including the United Nations climate change talks.

Qatar is the venue for the 18th annual conference on the United Nations Framework Convention on Climate Change (UNFCCC), commonly know as COP 18. From November 26 to December 7, 2012, leaders from all over the world discussed some of the most important challenges for global climate change. The goals of these international talks set the practical groundwork for major new global emissions reductions before 2020 and, ideally, designing an international legally binding global climate change treaty. This includes operationalizing the Green Climate Fund (GCF), which would provide a significant increase in financing for adaptation and mitigation for climate change projects in developing countries.

But, how is tackling climate change impacted by the world’s financial crisis?

It is hard to see real progress in climate change negotiations when governments do not have the environment as a priority in their national agenda. We know that the financial crisis is commonly a nation’s first concern and that there is a continued focus on productive activities, regardless of environmental damage – including continuous oil extraction and it’s excessive use. Anti-crisis measures are being taken but clean energy models are not encouraged enough; in fact, most people believe it is impossible, since corporate interests are at stake.

Financing is vital for developing countries to make the transition to use clean energy as well as adapting to the impacts of climate change. The EU countries have said they are willing to scale up to a 100 billion dollar commitment through the GCF by 2020; however, the road map for implementation is extremely vague. The absence of a commitment by rich countries to pledge any climate finance or to increase their efforts to reduce emissions has caused the latest UN Climate Talks in Doha to be another summit where not much happened.

In the media, presenting news of the global financial crisis comes before climate change; this devalues the public’s perception of urgency for action to prevent and deal with climate change.  Executive Secretary of the UNFCCC, Costa Rican Christiana Figueres, affirms there is not “much public interest, support, for governments to take on more ambitious and more courageous decisions.”

What does it really mean when the Secretary of the UNFCCC says there is not enough attention on the issue? Are the COPs not attracting enough notice? Or perhaps the model we are using will not bring a real international fair and ambitious finance resolution?

A paradoxical situation is that in the end, climate change will be expensive. Increased temperature, forceful rainfall, global drought, loss of biodiversity, water salinity increase, climate migration, and sea level rise, among many other events are climate change impacts that result in direct costs not only to our governments, but to civil society as a whole.

Today “climate change is already contributing to the deaths of nearly 400,000 people a year and it is costing the world more than $1.2 trillion, wiping 1.6% annually from global GDP”, says the study Climate Vulnerability Monitor: A Guide to the Cold Calculus of A Hot Planet. Researchers also estimate that the cost of climate change and air pollution combined will rise to 3.2% of the global GDP. The world’s least developed countries will spend up to 11% of their GDP tackling the problem.

We have a popular saying in Spanish “lo barato sale caro”, meaning “what is cheap today will be expensive tomorrow.” This is particularly true when it comes to stalled climate change negotiations.