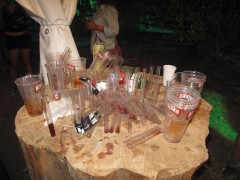 When I came back to Croatia, to spend  summer holidays with my family and meet up with friends, after being absent for a year, it seemed that Vuco knew what he was talking about: at least for the drinking part.

Summer in Croatia is a great season to get tanned, to swim and to party: in a bar, disco or on the beach with the guitar, as you like it! And who thinks partying, thinks drinking. Alcohol is a consistent partner at our anniversaries, marriages, and other important celebrations, but also of the ordinary weekend nights out. At the party it is almost rude to answer “a juice please” when somebody asks you what are you drinking. (If you add some vodka in it, you’ll be pardoned). Going out and hitting the town means necessarily an alcohol warm-up at one’s apartment (or outside, depending on the season), followed by a few rounds in a bar. Of course, love for alcohol isn’t reserved just for youngsters, the older ones also like cheer themselves up with a glass or two.

A small country for big drinkers

Drinking alcohol is a part of social gatherings, and since ‘everybody is doing it,’ in most of cases there is no taboo. “If you’re not drinking alone and every day, you’re not an alcoholic,” was my friend’s comment on my article. Yet, a quick Google search for ‘Croatia’ and ‘alcohol’ will get you to Forbes’s article, dated from 2007, in which Croatia was the synonym of a country of big drinkers. Per capita alcohol consumption from 2007 on in Croatia is stable.

There are similar findings in the World Health Organization’s 2011 Global Status Report on Alcohol and Health, which presents “a comprehensive perspective on the global, regional and country consumption of alcohol”. Although Croatia is not the country that drinks the most, it is in the company of countries that raise their glasses quite often. A Croatian citizen drinks on average 15.1 liters of alcoholic beverages per year, less than Russians (15.7), but more than British (13.4) or Finns (12.5). Alcohol consumption among youth is alarmingly high, according to ESPAD (European School Survey Project on Alcohol and other Drugs) 85% of young people drink, and more than 24% of boys and 17% of girls had five or more alcohol beverages in a row in the last thirty days, which gets us to the high third place in the world.

Is the Croatian liver more resistant than an average liver is? Not really.

Even if alcohol addiction isn’t the major problem in my country, alcohol-related diseases are the number second cause of mortality among Croatian men and the fifth among women. Excessive alcohol consumption is related to more than 60 types of diseases, such as cirrhosis and other liver diseases, hypertension, some neurologic disorders, gastrointestinal problems and some types of carcinoma, to mention only a few. Then we can add alcohol-induced violence and traffic accidents. Croatia has a high rate of liver disease and cirrhosis (above 25 deaths per 100,000) and is among the countries with the highest rates of traffic accidents involving alcohol.

Steps toward an alcohol-free nation?

The fact that the alcohol is firmly entrenched in Croatian social fabric along with the low cost of alcohol beverages are the main reasons of excessive drinking. One of the possible solutions to alcohol overconsumption could be increasing alcohol excise taxis, making it less affordable. Although these measures might discourage people from drinking, they could also have a little or none effect, decreasing the purchasing power of the individuals who would continue to buy alcohol despite its higher prices. The awareness raising campaigns could represent more effective long-term solution. In 2008 Brewery of Zagreb started a campaign called “Razmisli” (“Think”) which promotes responsible driving, targeting youth especially. Actions such as organizing free public transport after big concerts were undertaken, warning about the consequences on drunk driving, with a motto “When you drink, don’t drive!” A new Croatian health minister, Željko Jovanović, decided to integrate health education to a new school curriculum (mandatory in all the institutions of primary and secondary education) that should warn students about negative effects of alcohol abuse.

Joining the European Union in 2013, the Croatia will also have to reformulate its national alcohol policies within the framework of the European Action Plan on Non-Communicable Diseases 2012–2016. This Action Plan “aims to give guidance about action to fight alcohol-related harm at all levels and to set priority areas for European action, for increased international cooperation and for the participation of all Member States in a cost-effective, appropriate and comprehensive response that takes due account of religious and cultural diversities”.

These and similar actions that might be set out in the future, could be the start of a move towards a healthier Croatian community, in which alcohol wouldn’t become a taboo, but wouldn’t be an essential part of every evening party.