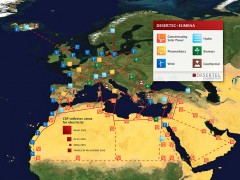 As we learn from Ulrike Reinhard’s article and the different local views on Future Challenges, achieving sustainable development is one of the most challenging objectives facing 21st century democracies. In this post we will take a case from Morocco that is a clear illustration of how transparency in governance is absolutely essential for achieving Democracy’s Green Challenge.

Desertec is a large-scale project aiming to use solar and wind energy in North Africa and the Middle East for the production of electricity. The concept was proposed by the Desertec Foundation and will be implemented by Dii Gmbh. As its initiators claim, the project aims to be the trans-mediteranean’s most important producer of renewable energy.

When seeking information about the MSP, one is confused by the flurry of articles and press releases. Yet even though many of them speak about cooperation,  very few in fact present the precise link between the Desertec program and the Moroccan Solar Program.

You might think the MSP was initiated under the aegis of Desertec, but its official announcement and the creation of the agency responsible for its roll-out very likely have no link whatsoever with Desertech as we will see.

In November 2009, at the Forum for the Future in Marrakech, King Mohammed VI chaired the presentation ceremony of the Moroccan project for solar energy, with an investment cost of 9 billion dollars. The ceremony was held in the presence of the American Secretary of State Hillary Clinton.

All this went down very well with public opinion and as a member of an NGO for sustainable development I saw a lot of enthusiasm in internal discussions coming from people who are more likely to be skeptical about any project bearing the name “Grand Projet Structurant”  – a kind of brandname associated with projects initiated over the last decade. The project is said to save the equivalent of one million tonnes of oil and avoid emissions of 3.7 million tonnes of CO2. Yet various details of the agreement still need to be highlighted and examined.

First of all, no reported discussion of the project was held neither in the Parliament nor in the government council before signature of the agreement. (Rumors even have it that the Moroccan Minister for Energy Benkhadra was only told about the project a few days before she was asked to sign the agreement, which given the previous Moroccan constitution would not at all be surprising). Furthermore, no traceable source shows that the top management of the National Office of Electricity – the first to be concerned by a shift in the Moroccan electrical mix – actually participated in any preliminary discussions before the agreement was decided. Moreover, almost no details were given about the project: everything was to be defined after the agreement. A national agency was then created: MASEN or the Moroccan Agency for Solar Energy[1]. Its director was directly appointed by the King and its very first mission was fundraising.

This decision was very well received by the community of advocates for sustainable development.  They had previously expressed concerns –albeit very hesistant ones – after hearing about discussions on a project for a French-engineered reactor in Morocco. (Moroccan nuclear option for electricity might have been the subject of previous discussions as is claimed by this wikileaks cable (06RABAT1643)

So far, any observer of the ongoing Moroccan Solar Program can hardly find any public information; I provide this (non-exhaustive) timeline that might  help you get a better idea of the issues involved:

– November 2009: Forum for Future meeting between the King of Morocco and the American Secretary of State; announcement of the Moroccan Solar Program.

– November 2009: MASEN, nomination of Bakkoury(whose background and previous experience were in finance). January 2010 official creation of the agency.

– July 2011: French Energy Minister Eric Besson announces that  France will participate in the MSP and that the French company Soitec will produce the first megawatts

– May 2012: Solar Impulse planning for land in Ouarzazate in sync with the start of construction in the Ouarzazate region of the largest thermo-solar power plant ever built.

If we take a look at the different statements from the former Moroccan Minister for Energy or the director of the National Electricity Group (ONE),  it transpires that the projected electricity needs for Morocco in the year 2020 are 15,000 megawatts of setup power; that solar energy is projected to supply 14% of total power by 2020, while actual installed electric power in Morocco now amounts to 5,000 megawatts. Given that national growth in electricity demand (as predicted by the Arab Union of Electricity) will be approximately 7%  between 2010-2020, it follows that Morocco has to make good a deficit of some 2,500 megawatts [2] for its own use before being able to export electricity.

Two further points also need to be examined: number one is the planned use of the electricity so produced. When you go through what the state media agency MAP says about the Moroccan Solar Project, you get the impression of Morocco-oriented projects implying foreign partners. In the above statements officials speak about the percentages of Moroccan consumption, yet solar energy is not optimal for the Moroccan grid above a certain percentage: the grid is dominated by domestic users whose consumption profile is out of phase with the production profile of solar energy as domestic needs peak in the evening and are minimum during the day – the exact opposite of the solar energy production cycle.

As no significant storage facility projects were announced in tandem with the solar program, such electricity seems to be intended for export; yet once again information about this is not easy to obtain. What is the part planned for export and the part for domestic use?

The second point concerns the role played by research: solar energy is a fast evolving topic for R&D, technologies develop on a time scale of about 5 years per significant improvement. Reading the various statements, it seems that no planned research program on solar energy is planned by MASEN. If this is the case, I am afraid that “black boxes” will be bought with no real transfer of technology. If I am wrong – and I hope I am wrong! –  MSP could be a great opportunity to develop new industrial links with Moroccan universities and technology institutes to further research and promote employment opportunities for university graduates.

To sum up, even though a solar program in Morocco is a great idea, the public should still be informed about the crucial details of policymaking, and parliament should also be consulted before such crucial agreements are signed. In my view the Moroccan Solar Program represents a case in point of where democracy’s green challenge has a name other than sustainability: and that name is Transparency.

[1] One small yet interesting sidelight: agencies in Morocco have always had an Arabic/French name; this is the first time – to the best of my knowledge – that a state agency has been given an English name in Morocco.