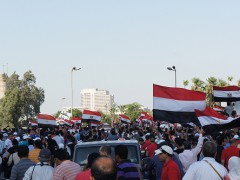 The events recently witnessed in Egypt have clearly stirred a huge wave of controversy on the international front. International political analysts and politicians are now divided in their views; while some perceive the ousting of president Morsi as a great achievement, others view it as a “military coup” and a set-back on Egypt’s challenging path towards democracy.

Personally, I am convinced that the ousting of Morsi was a huge success for Egyptians seeking true democracy and prosperity. I joined the June 30 revolution and cried for joy when our armed forces announced the collapse of the Morsi regime and his extremist criminal gang. This was the case for everyone in Tahrir Square. Millions of true Egyptians celebrated the hopeful return of their state, which was kidnapped for one full year by a group specializing in manipulating the masses through fake religious slogans.  Let me explain why Morsi’s rule faced such public opposition…

Since Morsi came to power, the Egyptian economy has not improved and its regional hegemony has clearly been lost as many Arab states were cautious about dealing with Morsi. Most importantly, Morsi’s regime paved the way for the emergence of sectarianism in Egypt, a phenomena that we have never before witnessed. The ousted president allowed extremist religious preachers to broadcast their sectarian views everywhere, even in his presence as happened a few days before his ousting when he invited them to a public conference he held to talk about the Syrian crisis.

During that conference, the extremists launched a strong attack on Shi’as, denouncing them as infidels, and praying for their death and destruction, all in the presence of our “civilian” president! A few days later, four shi’as were lynched in Giza, as a direct result of the sectarian backlash against those who do not belong to the Muslim Brotherhood (MB).

On the economic side, Egypt suffered from chronic economic woes, and the gas crisis and the electricity crisis which led to enormous and unprecedented public anger over Morsi’s rule and policies. The anger came from “civilian” citizens of Egypt who launched the “Rebel” campaign, aiming to impeach Morsi and hold early presidential elections on June 30 2013, one year after his election.

The Rebel campaign was astonishingly successful, collecting more than 22 million signatures in support of their cause. Rebel and all the opposition parties then announced mass protests on June 30, to force Morsi out of office, after he blatantly failed to meet any of the revolutionary demands raised by Egyptians during the January 25 revolution.

At the same time, the Egyptian defense minister delivered a speech, encouraging all political actors to act responsibly to solve the internal political crisis within one week, and warned that otherwise the army would intervene in politics to prevent Egypt from falling into a “dark tunnel”. The week passed and nothing was solved. In stark contrast, Morsi gave a speech where he strongly criticized figures of the former regime, the opposition, the media, and the judicial system. The speech was bitterly disappointing for millions of Egyptians, who took to the streets on June 30 to show Morsi and his MB the red card in no uncertain terms. The protests attracted the attention of people across the world, and demonstrated the huge groundswell of public opposition to Morsi and his policies.

The defense minister then delivered another speech, giving all political actors a 48 hour ultimatum to resolve the crisis and warning that the army would intervene to achieve the demands of the millions of protesters, if no solution was reached. After the speech, army Apache helicopters flew over Tahrir Square and Itihadiya Palace, where they were jubilantly greeted by protesters who clearly called on the army to intervene to set things straight.

A few hours before the end of the 48 hour ultimatum, Morsi gave another speech, where he insisted that he is the legitimate president, rejected the army ultimatum, ignored the demands of the opposition, and offered them absolutely nothing.

At the end of the 48 hours, the army invited figures representing the whole of Egyptian society (Azhar institution, Coptic Church, National Salvation Front [the leading opposition bloc], Al-Nour Islamist Party, MB’s Freedom and Justice Party [who refused to attend], and the co-founder of Rebel campaign), and they all agreed on a road map to get Egypt out of the crisis. The road map did not assign any political role to the army. Rather, it transferred the office of the presidency temporarily to the head of the Supreme Constitutional Court, suspended the controversial Islamist constitution of Egypt, and stated that the interim president would be responsible for:

This was the army-sponsored road map, which brought Egypt back on the right track but was misinterpreted by various international analysts, who followed the false accusations of the MB that betrayed Egypt and accused its army of planning a military coup. Now was this truly a military coup?

By definition, a military coup is a process where the army of a certain state takes over power by force and starts ruling the state. Certainly, this was not the case in Egypt. Respecting the demands of millions of Egyptians and handing power over to a (civilian) interim president on the very next day are not characteristics of a military coup. What we are witnessing is a revival of Egyptians’ legitimate dreams for freedom, dignity, and social justice.