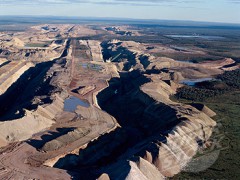 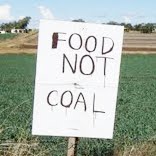 (Or, in the case of Australia, ‘when the last plot of arable agricultural land has been mined…’)

Food security is a serious but under-recognised issue in Australia. Federal and state governments are risking future sustainability by allowing foreign governments and investors to buy up huge sections of Australia’s most fertile and productive land for purposes other than agricultural production, or by allowing agricultural production that is solely intended for the benefit of other nations. Seemingly, the government is keen to exchange land for money regardless of how productive the land is, or for how many generations it has been used by Australian families for production. This is setting the stage for a precarious future for the next generation of Australians who could lose their stable footing due to these so-called ‘land grabs’. The future is being traded in exchange for short-term gains in the present. This situation is contrary to the principles of sustainable development outlined in the Earth Charter, which the Australian senate publicly endorsed in 2005.

The Greens report that over a quarter of the land area (including water resources) in Western Australia and the Northern Territory is now wholly or partially foreign owned. Various reports also indicate that much of the productive land in Queensland and New South Wales is also under threat of purchase by extractive industries. Angry local residents are actively rejecting requests for permits and exploration of future sites in the region, and routinely questioning government bodies for even considering mining developments on this prime agricultural land. Still, it is an issue that isn’t likely to go away any time soon. Regional plans are developed to consider the weight of each consideration (i.e. agriculture vs. mining) in moving forward with development. For an example of a plan in the Queensland context, see the Maranoa-Balonne Regional Plan, which outlines plans for developing this region that is rich for cropping and good for grazing, but which also contains plentiful reserves of coal seam gas, conventional gas and petroleum. Development is anything but simple and straight-forward within most Australian contexts.

Australia is now a net food exporting nation, a status that allows it not only to feed itself but to supply food aid to nations in need. The loss of sovereign control over agricultural land and water resources, along with dire predictions for climate change, pose a real threat to Australia’s future sustainability and its status as a major food exporter. The Greens recognise this and are fighting to protect the nation’s food and water supplies. Senators Larissa Waters and Bob Brown are pushing for legislation that call for food security measures and protection of the nation’s water resources from mining and other economic activities. These are important steps towards intergenerational equity.

While food security and water supply/quality are the primary concerns of the land grab issue, there are other considerations. Sacred Indigenous sites exist throughout the country and must be protected. Pollution from extractive industries has the potential to contaminate water supplies and neighbouring croplands, which may in turn affect pollination of the area’s crops by honeybees. Pollution and loss of livelihood would also threaten residents’ health and well-being. Communities may have to be relocated, and lifestyles altered as land uses change. Traffic congestion will worsen as mining projects develop, and additional infrastructure will become necessary. These concerns are all relevant and worthy of consideration as they too affect future generations of Australians. So, can Australia afford to divert its arable land away from food production for fleeting short-term economic gains? Can the driest inhabited continent on Earth risk what little water it has to mining processes that may potentially contaminate important fresh water sources, namely aquifers, lakes and rivers? That is a question for Australians to pose to their legislators – quickly and loudly – lest a global agricultural leader ultimately resort to importing their own food supply.

For additional information on food security in the Australian context, see: