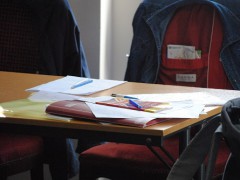 Macedonians know that hardly any foreigner will learn Macedonian.  It is the language of only two million people so mastering it doesn’t bring all that many benefits. Macedonians also know that there are many more opportunities out there than on the 25,713 km2 patch which they inhabit. So they put one and one together and come to the conclusion that the only way to exist in the global world is to learn the lingua franca of today – English.

If you are a tourist in Skopje and ask a young person for directions, there’s a 95% chance that a young person will know how to give you them in English. The city that tourists used to shun is steadily becoming more tourist-attractive. And of course, the easiest way to serve and sell to tourists is if one speaks English.

Open any job ad and a basic criterion for employment is that the applicant “speaks English” – more or less perfectly – the reality is that all applicants will speak English. Everybody knows that English is a sine qua non for employment, so parents sign their kids up for private English classes. Even the government has  understood that Macedonians need to speak English if the country wants to compete in the world market. In 2007 English was introduced in the first grade of elementary school and we are now raising a bilingual English-speaking nation. The fact is that in 2020 every 20 year old in the country will speak English. For a small nation to survive and compete with much more developed countries this is a great way forward. An English-speaking workforce is increasingly attractive and is of more value to international investors than a nation which only speaks Macedonian and Albanian (Albanian is the native language of 25% of the population).

However, with the rising supremacy of the English there is one evident looser – the Macedonian language itself. When people learn English, they increasingly forget proper Macedonian. They apply English spelling rules in writing Macedonian; they use English words instead of Macedonian and they become increasingly illiterate in Macedonian. All of a sudden everybody writes the months and days of the week with capital letters as in English, while in Macedonian both are written with small letters. Such language fallacies are visible everywhere – in the writing of ordinary people, on websites, in media which should have copy editors, and even in books which should also be proof-read. Certainly, powerful as it is  English should not be seen as the main culprit of the creeping corruption of the native language. Much of this is due to the weak teaching of Macedonian in the schools. Reinforced by the poor usage of the indigeneous language in popular media, this has spill-over effects on everyday writing.

So, as the nation becomes more globally competitive and attractive as workforce, it is blatently mistreating the key element of its identity – the Macedonian language. In times of growing globalization, the mixing of cultures and adopting of Western trends, a country really should know better. Taking on global trends should not come at the expense of the soul of the nation. In such times a country should wise up and take steps to preserve its cultural identity. Because in the end, what will Macedonia be without the Macedonian language?