As pointed out by the previous post on Young Moroccan graduates, higher education in Morocco does not provide reliable social equality, as the professional future of a graduate will be highly affected by his socioeconomic background. In this post and in the continuity of the previous one, I will present another social marker that young Moroccan Graduates have to deal with: the use of French language in the Job Market.

Khaled is a 22 years old student in Management; he studies in one of the World’s top universities. In the summer of 2011, he went back to Morocco for a three months internship in the Commercial Department of a Moroccan Company in Casablanca. Due to the prestige of his studies, he was directly attached to the head of the Department, Mr Waadoudi, as the company would be very happy that someone as Khaled joins it. One Morning, Khaled and Mr Waadoudi met Mr Trabelsi,, the head of the financial department, in the corridors, Khaled tells the short story:

–       “Good Morning sir, I am Khaled, I am an intern at the commercial department.“ Answered Khaled, in Moroccan Arabic.

He added, very politely, but still in Moroccan Arabic: “And you sir, you are?”

Mr Trabelsi left without answering Khaled, saying goodbye only to Mr Waadoudi, ignoring Khaled and leaving him with a very awkward sensation of humiliation.

A couple of hours latter, Mr Trabelsi met again with Khaled’s Boss, the two colleagues talked about Khaled and Mr Trabelsi did some bad comments about what he thinks is a non-courtois attitude to “speak Moroccan Arabic in the company with a head of Department”; afterwards, he learns from Mr Waadoudi who Khaled is “the outstanding intern we hardly managed to convince coming to our company, the Centralien* I told you about”.
The day after, Mr Trabelsi met Khaled and greeted him by his own initiative, in Moroccan Arabic!

Journalist Fahd Yata reporting from a Moroccan-French Businessmen meeting: Moroccan prime Minister says he will talk in french for the convenience of Moroccan businessmen.

The story of Khaled is probably an extreme case, but it is a face of a very untold Taboo discrimination in Moroccan Job Market: the French language discrimination. For instance, when Mr Trabelsi noticed that Khaled speaks Arabic, he would not imagine that Khaled is a Centrale Paris Alum and that the Company is hiring head-hunters to convince young profiles like Khaled to join. Mr Trabelsi probably thought that Khaled is just a “random new hired blue collar”: in several Moroccan companies, managers, engineers and other white collars would not naturally address a hierarchically superior in their native Moroccan Arabic and would rather use French until the superior allows them to switch to Arabic when speaking it himself.

In defense of the use of French language in Moroccan Corporate environment, France is the first economic partner of Morocco, it is therefore normal to require French language mastering for candidates to departments involving interaction with foreign partners; but this does not justify the social usage of French in Moroccan companies, this does not explain why you can find for example an American Morocco-based company where the local management is 100% Moroccan but employees should use French if they meet their Moroccan boss in the lift, while naturally speaking Moroccan Arabic with colleagues.

Moroccan Public University graduates’ skills in French are decreasing since the 1990’s as explained in the previous post on the topic. After the Arabisation of scientific fields in the early eighties in Moroccan high-schools, mastering French is becoming a social marker in Morocco and in companies it is considered as a competence-index: Mastering French means graduating from French-like Grandes Ecoles or private schools system, while being of Arabic culture means graduating from grassroots’ universities. As the latter are in crisis, Arabic is therefore associated to “incompatibility with corporate world” to cite a Human Resources manager in Casablanca.

Last two weeks and up to now, Moroccan social networks are hosting another debate involving the place of French: confrontation between the actual Government and state-owned television 2M regarding the general Scope Statement the government submitted to “2M” lead many netizens to rise the topic of the place of French in Moroccan public media and Moroccan public life in general, here are some non-exhaustive selected tweets: 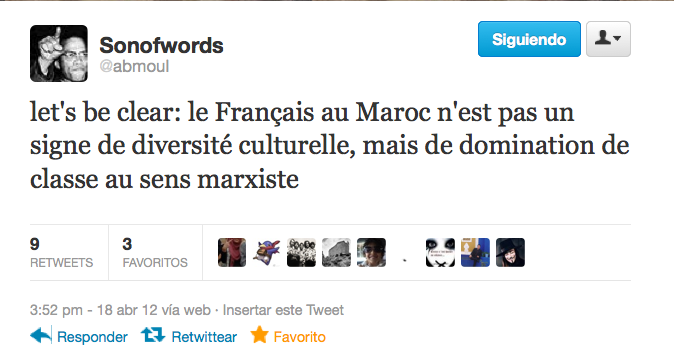 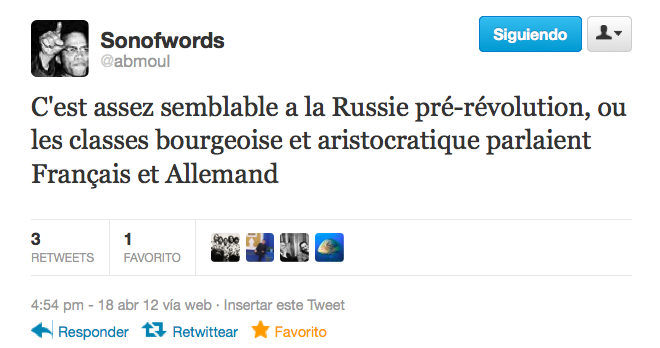 Moroccan Tweep @abmoul adds that the situation in Morocco reminds the pre-revolutionary Russia, where aristocrats and bourgeois spoke French and German. Friendly note of irony: he said all this... in french.

Moroccan tweep "@Maghribi_1" says that some of what he calls "francoma" puts on the same level of comparison: Using Arabic and Radicalism on one side and Using French and Modernism on the other, which is superficial.

Summing up, I would not blame Moroccan companies if they consider French as a necessary skill to be employed, but I cannot help not considering attitudes like Mr Trabelsi’s as something else than social discrimination.