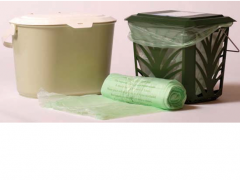 To me there is nothing more refreshing and soul-uplifting than to take a break from the stresses of daily life by going for a walk through a park or bushland reserve, watching the sunlight dance among the leaves of a gumtree or upon the surface of a stream. In doing so I am reminded I am both inextricably connected to, and dependent on, something so much bigger than myself – Mother Nature. More often than not, however, the landscape is tainted by rubbish thrown carelessly by passersby. Waste is one of those things that most noticeably pollutes our environment, and is directly related to the choices we make each day as individuals. And the statistics aren’t great: in 1996-97, Australians generated approximately 1,200kg of waste per person per year. By 2006-07, this had nearly doubled to 2,100kg per person, which translates to more pollution and greenhouse gases.

In Adelaide, one of the local councils is pioneering a policy-based initiative aimed at reducing the amount of waste ending up in landfill. My family and I moved down to Adelaide a couple of months ago, and I was surprised one day to find a roll of green coloured plastic bags on our doorstep. Attached was a letter from the City of Port Adelaide Enfield (our local council) explaining that here was our yearly supply of compostable bags, exclusively for kitchen scraps, to be placed in a special bin that is then collected to be turned into compost. I thought this was a fantastic idea, as we didn’t have such a scheme in Brisbane, so I looked more in to it.

Governments worldwide have been promoting the mantra of “Reduce, Reuse and Recycle.” Over many years, Australians have been actively participating in “dry” recycling (eg. paper, cans, plastics) and it is something that most of us now do happily without giving it a second thought.  According to Alan Richardson, the council’s Waste Management Officer, however, the next big frontier is reducing “green” waste. In an audit conducted in 2007, the council found that approximately 30-40% of all waste going into general household rubbish bins was kitchen scraps – something that could easily be removed from the waste stream. With a new 10-year waste collection contract looming, the Council decided to adopt what they call a “Bio Basket” – a small household basket lined with compostable plastic bags, which can then be placed in green bins along with garden waste, and collected by Council for composting.

After conducting a cost benefit analysis, Council calculated the cost of distributing a basket and roll of bags to each household and wrote it in to their contract over the next 10 years – 50,000 households with a yearly supply of 150 bags. They based their analysis on the estimate that if each household could recycle 1.5kg of organic material a week, it would, in time, make a significant impact on the cost of disposal. However, since initiating the program about two years ago, households have been recycling approximately 0.5-0.8kg of organic waste per week, a fair way off their target. Economically, so far, the program is not reaping the expected benefits, but environmentally speaking, it is setting a new standard – which other Council areas and cities will hopefully emulate.

According to Alan Richardson, the relative low rates of participation demonstrate that a major element of making any new environmental initiative successful is community education. It takes time for people to change their habits and to be convinced of the benefits of participating. In the case of the Bio Basket, matters are more complicated as not all council areas have the same program, so it’s difficult for state government programs such as Zero Waste South Australia, or Keep South Australia Beautiful, to promote on a state-wide basis. Nonetheless, Council has undertaken a variety of community education initiatives including newspaper articles, shopping centre visits, and presentations at schools – with yet more clearly needed.  The message may need to be repeated over and over again – but persistence is the key to inspiring change.

Another fantastic initiative the Council has set up is a cloth nappy library. It is estimated Australians use approximately 800 million disposable nappies per year, which end up as landfill. As a way of encouraging parents to switch from disposable to reusable nappies, parents are able to borrow kits of nappies  for a couple of weeks to try out the various styles and sizes, and then return them to be properly sterilised and cleaned. 20 to 30 kits have already been distributed, with apparently great feedback. It is initiatives like these, both creative and practical, that will ultimately convince citizens of the economic and environmental benefits of reducing waste.

So next time you finishing peeling your vegetables, think twice about where you throw your scraps. If you don’t have an organic waste recycling program in your area, write to your local council and encourage them to start one, or set up your own compost bin, compost heap or worm farm – your garden will be happier for it too. It may not seem like a big deal, but even a river begins as a drop of water – and it is small acts like these that will ultimately determine the state of the world our children inherit.

To watch a short video demonstration of the Bio Basket, click here.