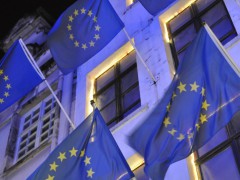 I have now been blogging on the subject of Europe and its future, if any, for quite a while so it’s high time to draw some conclusions. This is a vast subject and one quite dear to me so it’s not hard to keep writing, however modestly, on the subject. My work has led me to the event I am currently attending, the GES, a place where I expected to find some tentative solutions for the problems of Europe. And I was not disappointed as I walked out of the final plenary session, because over the past couple of hours I ‘d heard two very salient points that I think are fundamental to Redefining Success for Europe.

Photo courtesy of Matt May on Flickr (CC BY 2.0)

The first one was made by the chairman of the Bertelsmann Foundation, Aart de Geus at a preliminary panel on sustainable development. What he said, purely and simply, was that we need to get rid of subsidies. All of them. As fast as possible. Subsidies level out the playing field in a field that should not be levelled. They stifle competition and, perhaps even worse, they stifle innovation, a big problem for sustainable development and just as big a problem for Europe which could do with more sustainability and more development.

The second one came during the final plenary when Irene Natividad made a very good point about European unemployment. She said that what Europe needs is more job creators and to transform its economy from an economy of job seekers to one of job creators. She also said that the safety net in Europe is so good that a good many young people prefer to sit in its mesh waiting for good jobs to arrive. Mahmoud Mohieldin also on the panel, proposed that if those jobs are not easy to find, the state or society should step in and do something. I think the solution has quite a bit to do with the state but, fundamentally, lies elsewhere.

Taking all this into consideration, here’s how I would envision Redefining Success for Europe. My view – which is a rather radical one under the present circumstances – would involve a more federalized but at the same time, leaner Europe. The fundamentals of the European Economy are not as sound as, say, China’s but what Europe does have is leveraged assets and a great number of world-class private sector entities, ranging from corporations in the high tech, pharmaceutical or automotive fields to banks. So the logical thing for Europe to do would be to expand its private sector and incentivize it to stay and develop. My vision of a perfect Europe would be federal and, at the same time, laissez-faire  and tough regulation-wise. It would have a safety net but not one that coddles its beneficiaries. Citizens would maintain strong national and regional identities but not at the expense of a general sense of European unity.  Their state would have a small centralised government, a “day watchman state” if you will, one reinforced by widespread direct democratic voting mechanisms and small-scale representation rather than entrenched monolithic parties. Its economic fundamentals would need to be strong so a banking union is a must, a fiscal union would be a necessity and a Turkish-style regulatory body would be preferrable.

But how could such a radically different body come into being? It’s quite simple; as we’ve heard time and time again during the GES and before it, to save the eurozone and, implicitly, the EU we need a fast plan to deepen the union and solve fundamental problems or we shall face a slow and potentially disastrous unwinding. And while it’s true that endless ‘growth’ should no longer be our goal in the mid-future but rather a more inclusive and sustainable society, in order for Europe to recover it needs a boost, a boost that, could be offered by innovation, particularly through reform of  the ailing energy sector. The political and popular will to save the EU is present, even if more out of fear of the losses that a major crisis would bring than from a real sense of solidarity. But – and I cannot emphasize this enough – we need fast and determined leadership, very likely German leadership, and a paradigm shift from ailing, moribund welfare statism towards a leaner free market approach.

Political will is the only thing missing to reform the EU and save it from a slow decline into stagnation and irrelevance. As the GES has shown, there’s no lack of solutions. All we need are the policymakers to implement them. So it is up to us to find, elect or be the right people. Our willpower and determination are the only thing that will determine whether The European Project finds a new finality or comes to an abrupt finale.