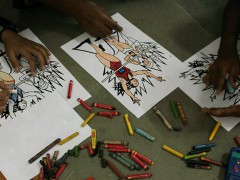 Children participate in a colouring competition about the Commonwealth Games, organised by Delhi NGO Udayan Care. Photo taken by the author (CC BY-NC-SA 3.0).

It is inevitable. Comparisons will be drawn between the now concluded London Olympics and the 2010 Commonwealth Games (CWG) hosted in Delhi, India. Besides the commonalities—international sporting events, extravagant ceremonies and billions spent on infrastructure—there is a sea of difference between how the British held their event and how the Indians reacted to theirs.

London has hosted the Olympics twice earlier so it was no big deal for the city to invite the sporting world once more to its doorstep. It would be safe to say that the British were supremely confident that they could pull off the games without hiccups. Still, they had to contend with the extravagant legacy of the Beijing Olympics which they side-stepped with élan, with the organiser of the opening ceremony, filmmaker Danny Boyle, saying: “It was impossible to do anything bigger than the show in Beijing, which stunned the world with its sheer scale… and you can’t get bigger than Beijing. We’ll try to do something different.” The British organisers were confident of pulling off the event smoothly.

For Delhi 2010, it was not the same hunky dory story. For India, getting and hosting the CWG was a matter of pride. No wonder people wanted the games to go off well and show the whole world that the nation had indeed emerged from the shadows of princes, snakecharmers and beggars. But its organising committee let the nation down with allegations of inflated bills, sloppiness, corruption and mismanagement.

India became a laughing stock with all and sundry taking potshots. Foreign atheletes threatened to boycott and eventually some did pull off their threats. Separately, both China and the UK offered last minute help to India in organising the games, but this was more of a snub than a genuine offer. The foreign media pontificated that if the games were not to be cancelled, they should at least be postponed so that India could get its act together. The nation lost face and Indians their confidence.

Children from the Delhi-based NGO Udayan Care play at one of the homes outside Delhi, India. Photo by the author (CC BY-NC-SA 3.0).

Supporting the Spectacle or Exploiting it

It was not merely that thing called confidence that showed up so starkly, it was also how the political leadership conducted itself. If  in India politicians in collusion with other unsavoury characters used the CWG to milk the nation through expensive and hugely inflated contracts in construction and infrastructure, it was exactly the opposite in the UK.

British politicians reserved for themselves a cheerleader’s role for their Olympics. London mayor, Boris Johnson, reacted to bus drivers bringing in foreign sportspersons and getting lost with the casual quip, “If they took four hours, then they will have seen far more of the city than they might otherwise have done.” Smart, isn’t it?

Just look at this example: when US presidential candidate Mitt Romney criticised London’s preparedness, Johnson again showed his unstinted support for the games: “I hear there’s a guy called Mitt Romney who wants to know whether we’re ready. He wants to know whether we’re ready. Are we ready? Are we ready? Yes, we are!” And Londoners roared in support for Johnson at a huge public rally.

It was a different scenario in India. The sheer embarrassment of having to read about collapsing bridges, escalating costs and delays in sprucing up games venues turned the people against the CWG. Senior Indian politician Mani Shankar Aiyar even said: “I am hell out of the country for these two weeks, since I do not want to witness the games.” Another of his remarks caused a furore, when he commented that he would be “unhappy if the games are a success.”

Fortunately, despite the chaos and corruption, the CWG were an unbridled success.

The Legacy—In A Shambles or Otherwise

It is too early to predict how the infrastructure created for the London Olympics will be put to use in the long run. Knowing the British, I am sure it will be made good use of. The next edition of the Commonwealth Games, to be held in Glasgow in 2014, will ensure that British sportspersons continue to train in their newly created Olympic infrastructure.

Again, it is a different story in India. Less than two years down the line, the stadia are in a mess. Investigations by media in 2011 had revealed that those stadiums renovated with massive over runs are now lying empty, disused and vandalised.

Indian sportspersons have categorically stated that no major sporting events have ever been held at the central stadium which hosted the opening and closing ceremonies for the CWG. As recently as last week, one of the main stadiums was being used for the grand purpose of detaining anti-corruption activists.

If the London Olympics will be known for sports legends like Jamaican speedster Usain Bolt, British boxer Nicola Adams and women athletes from the Arab countries, the Commonwealth Games Delhi’s enduring legacy will be of those politicians and officials who are behind bars for making the games a playground for corruption.

That the huge sporting infrastructure India created did not help Indians was reflected in the meager medals tally – two silvers and four bronzes – that they brought home from the London Olympics.

It is high time for Indian politicians to inculcate themselves with the sporting spirit. This might also help them to reflect on why the CWG infrastructure did not really push up India’s medals tally in London.