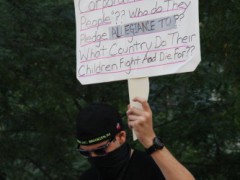 I could hear the bongos playing from down the block. As I walked closer to Zuccotti Park, the pseudo headquarters of the Occupy Wall Street Movement, every one of my senses lit up. I saw colorful costumes and hand-painted signs, I felt the massive throng of people sliding along as police officers shouted orders to move quickly, and I smelled the powerfully distinct odor of humanity.

Although the group was diverse and the battle cries many, I left the occupation with the sense of a common desire among the protestors: to remove corporate control from politics and make the government represent the interests of the people who elect them. This demand seems simple and uncontroversial enough. The question is how can the occupiers channel their frustration into action? I believe there are three viable possibilities for the movement going forward:

1) The most straightforward solution would be to support a currently elected official who will promise to work toward representing the above desire. The most obvious choice is President Barack Obama. Obama came into office promising one of the most transparent administrations in history with claims to represent the interests of the average American. As climate activist Bill McKibben said over human microphone in Washington Square Park, however, we need to free that Obama, because there’s an impostor in office now who has been far friendlier with Wall Street than anyone could have imagined. But that does not mean the President is a lost cause. Much of his friendliness toward big business is a result of the political reality that he needs their money and support to retain the White House. Given his troubling prospects at reelection, however, he may be willing now more than ever to return to his original campaign platform to recapture the grass roots support that helped him win in 2008. The key for Occupy Wall Street is to receive some tangible action from Obama on the front end, e.g. advocating for more financial regulation, more flexible student debt structure, and higher corporate tax rates, to ensure that he is actively onboard. Otherwise, the empty endorsement of a President who pays lip service but little else would be the kiss of death for a grass roots uproar.

2) The second option is for the movement to select a few key policy demands and push for government to meet them. One of the biggest criticisms of the occupiers is that they are too loosely defined and unaware of political and financial realities to articulate coherent and effective demands. I agree that the movement needs to make some concrete choices soon or risk becoming an amorphous media spectacle, but I think sympathizers and pundits have already proposed an excellent list of objectives. These include a Financial Transaction Tax, forgiveness for student debt, and increased regulation over the kind of speculative investments banks can make. Each of these proposals is tangible and would draw support from the protestors and policy wonks alike, not to mention from the public at large. The time is ripe for the movement to pick the best of the bunch and publicize their demands.

3) The third and final option would be the most difficult to achieve, but would potentially have the most lasting impact: a fundamental restructuring of the system to remove corporate spending from politics. This could come in the form of legislation mandating more comprehensive campaign finance rules or possibly even from a constitutional amendment denying corporate personhood and limiting corporate political donations. Achieving such reform would be difficult, but certainly not impossible. If the number of protestors, not only on Wall Street, but also throughout the country, continues to grow, then these kind of far-reaching reforms may soon enough seem perfectly plausible.

Only time will tell if adopting any or all of these suggestions will make the movement successful, but I find many reasons for optimism. The first is that all successful social movements begin with numbers and energy. From what I saw in New York and the hundreds of thousands of supporters I see on Facebook and Twitter, it is obvious that both energy and numbers are there. Second, the establishment is beginning to take serious notice. Within the past few weeks, President Obama, Treasury Secretary Timothy Geithner, and Chairman of the Federal Reserve Ben Bernanke have all issued statements acknowledging the inequalities and systemic reasons for the economic crisis and even sympathizing with the concerns of the protesters. Now that national and world leaders are listening, it is time to give them something worth listening to.

This article has originally been published in “The Greater We” on FutureChallenges.org.