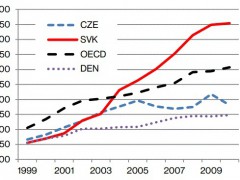 By definition, healthcare plays an important role in any country’s economy, along with the food industry and many other sectors. One of the differences, though, is that, depending on the patient’s health state, it could become very expensive. This makes it the natural province for insurance companies.

In Slovakia health insurance is mandatory for everyone with permanent residence status. The amount of money paid by each individual depends on their income, not on their state of health or associated risk level. People pay a flat rate for health insurance, but obviously those with higher incomes pay more in absolute terms. The health insurance contribution of children and some other social groups is paid for by the state, but there is also room for extra insurance or direct payment for items not covered by mandatory insurance.

The Slovak healthcare system is not efficient

Despite regulations (or should this be because of them?), there is always a lack of money. As the American example shows, the system could always spend a few times more without achieving significantly different results. That’s why it is necessary to keep up the drive on efficiency.

In a recent report [sk] the Institute for Financial Policy [at the Ministry of Finance of the Slovak Republic] tried to measure healthcare efficiency against a variety of benchmarks. Not just in medical terms like life expectancy at birth, infant mortality or amenable mortality (deaths that could have been prevented by timely access to healthcare), but also by consumer indexes which rate patients’ satisfaction with the system.

Their conclusion assumes strong causality between healthcare and health and indicates that the Slovak healthcare system is not efficient enough. It’s a conclusion substantiated by economists who point out that our expenditure on healthcare is growing faster than our health is improving.

We know that our per capita number of hospital beds is over the OECD average. What’s more, compared to comparable countries, we still spend too much on drugs. This happens despite price regulations and the mandatory patient share of medicine costs (introduced to inculcate greater prudence in spending).

Improvements in healthcare do not necessary mean better health

There are many things to do to make contributers, patients, doctors, nurses and other groups happy. But even if we make our healthcare system the best in the world, this would not necessary mean that Slovaks will become the world’s healthiest nation. This is simply because our healthcare system, including preventive health checks, addresses the symptons, not the root causes, of disease. Now I do not mean that we need to switch to Chinese traditional medicine. Even the best healthcare is not the only – or even the key! – factor in determining the health of the population. The Slovak Health Policy Institute estimates [sk] its influence to be about just one sixth of the whole. So if you want to bring better health to more people, you can’t concentrate on healthcare alone.

So how do we care for our health?

You might think that caring about people’s health is the job of the state. The state shows concern for health, for example, when it raises extra taxes on alcohol and cigarettes. But it’s important to remember that it does not forbid them completely; it increases taxes to gain higher revenues.

This does not mean the state doesn’t play any positive role. It has to create and enforce rules in areas like food or drug safety. But the main responsibility is always on the people themselves. The lifestyle people lead is the main factor influencing their own state of health.