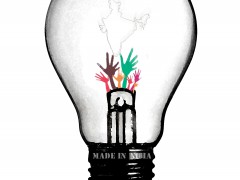 Apparently, India has 75 million unemployed young people. To put this in perspective, this figure is equal to the whole population of Iran.

Yes, the Indian economy is growing rapidly (even if it has slowed down a bit at the moment). Yes, the Indian service industry is perhaps the most competitive in the world. Yes, Indian consumers are amongst the world’s most confident. Yes, the total Indian workforce is more than 440 million people and growing. Yet all these facts in isolation do not do justice to the reality of India. Like almost anything else in India, the question of employment is a complex one.

Firstly, growth in India is largely ‘jobless growth‘ (which is to say that generation of new jobs has decreased over time). This means that while a few sectors are growing exponentially, large parts of the country are facing tough times finding livelihoods and making ends meet as inflation breaks people’s backs.

Policy pundits often remind us about the ‘demographic dividend’ that India stands to earn because of its large pool of young people. But is India really ready to employ this massive workforce, or will it allow the frustrations  felt by its young people (due to lack of access to opportunities) snowball into social unrest in the coming decades?

Let me begin with a simple premise: nearly half the country’s citizens are under 25 years of age. So how do you imagine these people are spending their time today? Yes, many of them are indeed in schools and colleges. But then there are about 12.6 million kids aged between 5-14 who have to work to survive; many of them in life-threatening conditions. Like the 70,000 children who work illegally in the coal mines of Meghalaya, a state in north-east India.

Even among the ones that do go to school (about a quarter) find that their teachers simply don’t turn up for the class. Teacher absenteeism is particularly widespread in state schools in marginalized rural areas. And even among the rest, the quality of teaching is often below par. This is evident from the mad rush for the limited number of seats available in ‘good’ schools and colleges which creates surreal situations such as the one last year where the cutoff for admission to a college in Delhi was set at 100%. You can imagine how the ridiculous competitive atmosphere can easily drain the life out of a poor school kid in urban India.

So there is this one hyper competitive India of urban cities where kids go to coaching classes, have tight schedules and heavy backpacks. And there is the other India of rural and marginalized communities where the kids often have to skip school to lend a hand in ensuring the family’s mere survival.

How do you think the future will pan out for these two extremes? But never mind the future, what about the present? Most of the opportunities in India are narrowly concentrated in the service economy where knowledge of English, and specialized skills are required. Traditional trades, knowledge and occupations are becoming increasingly marginalized.

And alarmingly, many pundits and trade analysts seem to prefer rural to urban migration. That can’t be a sustainable model for growth over the long term. Both Indias have to prosper together. Opportunities must be created for the ‘other’ India too.

At present, according to McKinsey, 53% of employers in India are unable to fill entry-level jobs because they can’t find people with the right skills. So we have millions of people who are unemployed on the one hand and millions of job vacancies that go unfulfilled, on the other, because the government has lacked the foresight to match these two situations with the right education and access infrastructure.

All is not lost, though. India has prospered over the years, not because of any planned measures or foresight by the government, but by the entrepreneurial & smart working spirit of Indians. Education is attracting a large amount of venture capital, addressing a shortfall of around 200,000 schools in India. Education is among the hottest sectors being targeted by venture capital and new young entrepreneurs coming out of India. E-education alone is expected to be worth $45 Bn by 2015.

India’s future: Made in India by the Indian Spirit of Innovation. Image by Ajinkya Pawar(CC-BY-NC-SA 3.0)

Tarun Khanna, an HBS professor, places his bets on the ‘Billions of entrepreneurs of India & China’. According to him, ‘people in these societies are running faster than their rules and laws can keep up.’ And it is something that I witness on the streets every day as government authorities take down roadside street food stalls, and the very next day the same vendors pop up and start operating at different times in different places.

The innovative strand in an Indian entrepreneur’s DNA makes India one of the most dynamic and ideas-rich places on earth. India’s inclusive growth will come not from those outsourcing contracts that seem to dominate the business stage with India as a global player. It will come from the indomitable spirit of innovative shown by the entrepreneurs of heartland India.