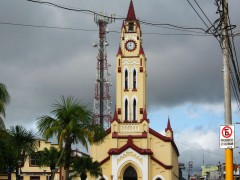 The main church in Iquitos

While some cities have well-established founding dates and receive the benefits of medium and long term planning, there are others that don’t know how and when they were established and don’t know what it is to grow in an orderly manner. Iquitos, a city in the Peruvian Amazon, is one of these cases.

In the mid-nineteenth century, more precisely on June 8, 1842, Iquitos was elevated to the status of a member town of the Loreto disctrict, Maynas province, Amazonas department, but its real birth lies forgotten among the primeval mists of Iquitos indigenous tribal settlements and the evangelizing missions of first the Jesuits, then the Augustinians and in the changing river courses of the Amazon. After this official recognition, the establishment of facilities for the Peruvian navy gave some sort of form to the city.

However it was in the last decades of the nineteenth century that the rubber boom changed Iquitos from a village of 300 souls to a thriving, cosmopolitan comercial hub of 10,000 people that was closer to Paris and London than to Lima, the Peruvian capital. It’s from this age of wealth and extravagance that many of the iconic buildings of the city come, of which the best known is the Iron House, designed by architect Gustave Eiffel, built in Belgian workshops and shipped across the Atlantic and up the Amazon River to Iquitos where it was finally assembled.

With the end of the rubber boom in the second decade of the twentieth century, Iquitos entered a period of stagnation and economic decline, but still remained the capital of the region, and was saved from complete decline by the obligatory military and government presence, and its role as the commercial hub of the area. It was also during these years that the reputation of the city began to grow as a place of revelry and hot women.

But it wasn’t until the 1960’s with the enactment of a tax exemption (later reduced) that the city began to grow again. Higher growth was also driven by the start of oil activity in the area in the 1970s. Ever since then the city’s population  has not stopped growing, driven by high internal migration from rural areas to the city.

All these facts have shaped a city that has grown wildly, in stages marked by the rise of certain extractive activities against a strong background of administrative and service activities, with little industrial production. Moreover, the unique ancient Amazon culture carried to the city by rural migrants has failed to adapt to the reality of a life dominated by other economic strategies of survival.

Today Iquitos is in a critical situation. The implementation of a controversial project for the city’s sewerage system is in chaos and the cause of multiple traffic accidents, and although presumably this is temporary and for the improvement of the public infrastructure, the complete lack of supervision by the authorities only aggravates the situation.

Another current problem is the rising of the rivers that flood parts of the city even beyond the areas usually subject to flooding. This again reflects the lack of urban planning and the uncontrolled spread of urban sprawl and is a problem that city authorities contemptuously ignore, showing little inclination to take preventive measures against this type of weather event.

A flooded neighborhood in Iquitos

But the city has also other deeply rooted and perhaps less visible problems, such as the large informal employment sector, increasing crime, the laundering of drug money, and pollution and scarcity of drinking water to mention but the main ones. Even economic sectors in which Iquitos has recognized strengths such as tourism, are not being well used and tour  operators are now letting their customers spend as little time as possible in the city by taking them to resorts and tours outside of Iquitos.

A city is the product of the collaborative efforts (a sort of non-explicit crowdsourcing) of its citizens. The spirit of Iquito has traditionally been both vibrant and lively. It’s up to its own people to maintain this spirit without unhitching from the wagon of modernity and development. One way to accomplish this is through the choice of the best authorities, another to embrace and optimize the city’s reality without losing the values ​​and traditions that make it unique and irreplaceable.

All other photos are by the author.