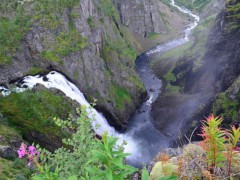 The Norwegian Oil Fund reinvests state revenues from the country’s petroleum sector to preserve today’s wealth for future generations. This system brings together growth and sustainability – but does it in reality?

Norway is known as one of the richest countries in the world. Its fortune is based on its huge oil reserves, discovered in 1969 in the country’s continental shelf in the North Sea. Today Norway is the world’s seventh largest producer and exporter of oil. As the Norwegian government’s website proclaims: “In 2012, the petroleum sector accounted for 23 percent of value creation in the country. (…) only around 42 percent of the total expected resources on the Norwegian continental shelf have been produced.”

This means that growth is secured for at least the next decades. So what about sustainability?

Hydropower, by the way, provides relatively low energy prices which have led to the interesting national habit of not switching off the lights, even when nobody is in the room. This carefree approach can be found in other aspects as well, such as the high amount of food wasted in the country. It is financially affordable in Norway, but certainly has nothing to do with the lifestyle we usually call sustainable.

So Norway’s electricity is provided by clean and cheap hydropower, and the oil produced is mostly sold abroad. Only a small part of the “oil money” (taxes, license payments and dividends) flows into the state budget. Since 1990 most of it has gone into what is known as the Oil Fund (its official name is The Government Pension Fund of Norway), which invests and preserves this money for future generations of Norwegians, as a means of compensating for the forthcoming expected decline in income. (Oil revenues are now estimated to be at an all time high which will diminish over the next decades.) The Fund invests the oil money wisely: it is currently the largest stock owner in Europe. It has an average ownership stake of 1% in global stock markets and 1.74 % in European markets. Its total value stands at 785,2 billion USD and it’s constantly growing. Looking at these numbers makes me want to be Norwegian: the per capita share of the Oil Fund is a staggering 155,177 USD.

But at the end of the day does the Oil Fund really bring about the marriage of growth and sustainability? True, it saves a big part of today’s growth-driven welfare for coming decades, which means that today’s and tomorrow’s Norwegians are incredibly lucky – uniquely so in global terms. But at the same time, this welfare doesn’t go hand in hand with a resource-saving lifestyle, with “living within our means”, as defined in our Lead Article for this topic. Therefore I’m not sure that we can speak about sustainability in its original sense.

Moreover, the whole system is still based on the export of oil to other countries which also means exporting oil’s downside as well such as pollution and lack of motivation to switch to clean technologies. If every country in the world switched to renewable energy, Norway would have no one to buy its oil.

In other words,  the Norwegian way of joining growth and sustainability is based on a unique “resource blessing” of oil and water, and is limited to a national level. It is not a model suitable for global application.