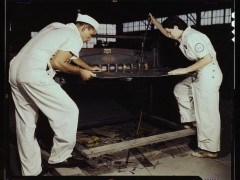 It is clear, to even the most casual observers of American politics, that one of the most pressing problems of the past several years and a poignant issue in the 2012 election cycle is jobs. With unemployment rates at dismal levels—8.5% as of December 2011—and not having fallen below 8.0% since January 2009,[1] Democrats and Republicans have been slogging it out over who is to blame and what steps need to be taken to ameliorate the situation.

This marks a significant change in the focus of the American electorate. Following 9/11, security and terrorism were, for at least a decade, the primary issues on most Americans’ minds. However, as Eurasia Group, a political risk consultancy, argues, the 9/11 era is over. Over the next few years, economics—especially jobs—will be the driving force behind politics, both in the United States and abroad.

But while politics shift to an economic focus and politicians and pundits began to scrutinize, bolster, and tear-down each others’ and their own job-creating records, many gloss over the fact that governments are rarely directly responsible for creating actual jobs. This is particularly true in free-market systems with relatively small public sectors such as the United States. Instead, governments can indirectly facilitate job creation by generating a favorable economic environment, thus establishing the foundational prerequisites needed for the private sector to flourish.

While grandiose claims of successful records of job creation can help win elections, politicians need to focus on what the government can realistically accomplish. By concentrating on the fundamentals, policymakers can promote the optimal economic environment that will allow the private sector to effectively create jobs.

First, the rule-of-law has to be established in a clear and cogent manner. This is largely a settled matter in the United States, yet there is still work to be done. Businesses need to be able to fairly reap the benefits of risks they take while also suffering the costs of bad outcomes. This implies disallowing graft, abuse, corruption or cronyism. It also implies treating all equally and fairly. The government should not, to use a tired phrase, pick winners and losers. It should not bolster some who are failing nor give others a head start. Government should not show preference to certain industries, sector, or firms; companies should succeed or fail on their own merits. Instead it should play referee, defining the rules of the game—rules that are the same for everyone—and then ensure that all players behave accordingly.

A second step is to diminish legal and regulatory uncertainty. This will help provide much needed market confidence, a prerequisite for successful business investment and job creation. When there is considerable uncertainty in legal and regulatory worlds, businesses are often hesitant to invest in expanding their operations. When businesses cannot predict the regulatory environment that they will face, whether there will be costly environmental or labor obligations or if complexities will be introduced to hiring and firing processes, they will tend to become more cautious in their business decisions. By providing clear and largely stable laws and regulations, businesses will be more confident in their operations and act in a manner that will be beneficial to all. In this regard, it is not important whether corporate tax rates are high or low, or whether regulations are onerous or lax. What is important is constancy. Businesses must be confident that there will not be wild swings in laws and regulations from year to year.

A third point is to create legal incentives for entrepreneurship, investment, and economic activity. Laws and regulations must not simply be stable and consistent but also must be competitive, in order to better attract investment. Corporate taxes should be low and efficient. Regulations are important, but should be smart and focused on narrowly protecting abuse, not social engineering. The system should be just and encourage the efficient use of capital. Laws and regulations that incentivize businesses to take reasonable, but responsible, risks while preventing undue harm from befalling unwilling counterparties are a necessity.

These tools are not only employable in established, Western, free-market systems, but are essential for developing states as well—if not at times more important in emerging economies. These policy tools will need to be employed in diverse combinations as the situation in individual countries varies. After all, there is no single program, no unique foundation that will move a state into prosperity and economic growth. Development and economic growth is not a linear path, where one causal factor will immediately spur a country forward, but a cyclical one, where the right foundations will advance an economy, which will in turn strengthen the foundations. Nevertheless, by focusing on the means, by working to establish the right system and environment, instead of fixating on end results, governments can begin the upward spiral to more robust economies.

In developing countries, establishing these foundational prerequisites is essential to beginning (or continuing) the march forward. In developed countries, particularly the United States, a renewed focus on these aspects is equally important. While arguably somewhat esoteric in nature, and thus less amenable to snazzy primetime sound bites, such issues are truly the core of any successful government policy to ameliorate employment problems. Fancy plans to bolster specific sectors or aid crony industries will not do nearly enough, if anything, to create jobs. In fact, such policies will often undermine the very foundations that are essential to healthy economic growth. Only by focusing on the fundamentals can the government and policymakers truly help their economies.