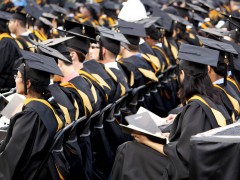 Graduates at the world-class John Hopkins University, Maryland. So how does Macedonia measure up? (Photo by Sakeeb Sabakka, on Fotopedia, CC BY 2.0)

It was long ago that one of the world’s most famous political scientists, Seymour Martin Lipset, established a positive correlation between the level of education, urbanization and other factors of economic development on the one hand and democratic development and a more participative political culture on the other.  In short, the more schools the better. But is it always so?

With the stiff and restrictive education system in place in Macedonia students usually took longer to graduate. Each university is known to have at least one professor who does not let the majority of the students pass. It is a guessing game to know whether this is because the teacher really wants to see the students show what they know or whether he/she is waiting to be offered a bribe or just never bothers to read the written exam essays. At the Faculty of Philology in Skopje one such professor was arrested for taking a 600 EUR bribe in 2009. However, universities neither have an interest in punishing nor can they realistically punish bad behavior among faculty, so today the same professor is back at the university.

More worrying is the fact that the education system has not produced an educated nation. In 2002 the percentage of persons with a higher education was at a 10% low: 36.9% had secondary education and 35% had completed primary education while the rest had some or no primary education at all. By way of comparison, some of the most developed and educated countries like the USA, Canada and Japan achieved a tertiary sector educational attainment of 30% back in 1997.

These striking results have led to a sweeping change in education policy in both government and private investment in higher education. The total number of higher education institutions has increased from 2 (founded in 1949 and 1979) to 19 in the last 10 years. The number of state funded universities has risen to 5, while the rest are privately funded. The newly founded schools gave the opportunity to continue their studies to the many who were not accepted in state universities. A new concept of dispersed studies in smaller towns was also introduced. This means that teachers from designated departments travel to smaller towns to hold classes, and youngsters who previously could not afford the cost of living in another city now have university classes on their doorsteps.

Yet have all these changes in education brought about better education? I am afraid the answer is a definite no. Instead of increasing the quality of education, improving the schooling provided by the older universities and raising standards by increasing competition, whether state run or private, the newly established venues for education have lowered the level of educational attainment in the country. Attracted by easier standards for enrolment, many high school students rush to get a fast degree. If a student has a difficult time in one faculty and cannot pass its exams, she/he simply switches to another faculty where this will not be such a problem. Universities are being run like businesses which means they are being run for profit. The dean and the professors are only too well aware that, should their students leave the school, there will be no money for salaries, so they go very easy come examination time.

The consequences of weak education are multifarious, both for the individual and the society. Macedonia needs to look seriously into whether it is producing more university educated graduates or university degrees that are hardly worth the paper they’re written on.