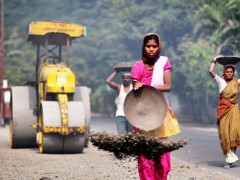 Whenever I switch on my television or flip through a current affairs magazine, news of the devaluation of the rupee is the inevitable main topic, alongside news of the euro crisis. The euro crisis has shaken us and has made us wonder that if a powerful and unified economy like that of Europe can fall into the doldrums, then where does a country like India stand?

But this is not what we are talking about in the streets, office canteens or informal discussions. The only thing which is haunting the great Indian middle class or any other Indian for that matter is the unabated rise of inflation, the ever higher prices we are paying for daily consumer goods and food items.

So the question is: Are inflation, devaluation of the rupee and the euro crisis separate issues or is there a connection between them? Is one causing another or is it all a vicious cycle of interconnected global issues?

The rapid devaluation of Indian rupee and the economic crisis in Europe are seen as the main reasons for this impasse in India.  After Spain, Portugal and Greece, it’s now Italy’s  turn to experience a major slowdown. Since Europe is India’s biggest trade partner, any crisis over there directly hits Indian exports. Besides which, the American economy is not without its own set of problems either. Roughly 60% of the revenue of Indian IT companies comes from the US & Canada. So in this scenario of economic dependency, any negative trend in the West is not long in taking its toll on the common man or woman’s wallet.

The Common Man: the rising price graph showing on the wrinkles
Photo by Kaustuv Ghosh (CC-BY-NC-SA 3.0)

The Indian domestic market itself is so big that it is more or less capable of absorbing such economic shocks, but chronic mismanagement and corruption in the Indian system makes any such move that much harder. There is still no effective management of the supply chain that joins the producer to the consumer, especially in the agricultural sector even after six decades of independence. Thus people continue to die of hunger while stocks of grain lie rotting in storage.

The end price of produce bleeds consumers but all the profit is grabbed by the middlemen, leaving farmers high and dry. And the Government seems unwilling to do anything about it. Though many of the corporate giants of India have entered the retail business, the situation remains much the same as before. The long pending proposal of allowing FDI [foreign direct investment] in the retail sector and letting giants like Wal-Mart do business could help us do away with the meddlesome middlemen, if only it were implemented. .

Rising fuel prices are another matter of concern as India is highly dependent on the import of petroleum for energy. Estimates show that we import 65% of the petroleum we use which is draining India of hard earned foreign currency. Since the de-regularization of petro-products in India, the slightest rise in crude oil prices drives households all across India to despair as transport costs go up along with the prices of all commodities.

A closer look of the current scenario should make it clear: the foreign currency returns of Indian companies have shrunk due to the euro crisis and new visa rules for the USA – many Indian IT companies are losing millions of dollars’ worth of contracts to US companies. Yet when it comes to petroleum and other raw materials, India’s dollar spending has remained the same. This gradual process has created an imbalance in Indian foreign currency reserves. In other words, there is a shortage of dollars for Indian importers, but on the other hand, the Indian Government has recently pumped millions of rupees into the economy in the name of welfare schemes. MNREGA (Mahatma Gandhi National Rural Employment Guarantee Act) and direct cash transfer programs are the most prominent examples. While average domestic production remained more or less the same, the oversupply of the Indian rupee has pushed inflation up.

We can say for sure that this deadly cocktail of financial mismanagement and global economic crisis is making serious inroads into the wallets of ordinary men and women. Yet with general elections coming up next year the ruling elites of India, our very own politicians, are far too busy to pay attention to the such scenarios. The Government will not dare to take any tough action as they fear upsetting any segment of society just before the elections. Hence the chances for improvement seem depressingly slight.