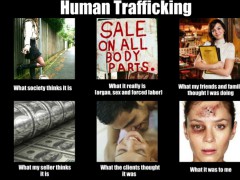 When I was a kid, I could play this game for hours: staying in front of the mirror, moving my left hand to see whether the person on the wall would move her right hand… And I was incessantly expecting she’d move her left hand, just like myself. I had never thought about what this would mean, though. The exciting perspective of becoming two independent persons was just too deliciously overwhelming.

Today, the dark circles under my eyes stare back. And I’d give so much to see the person in the mirror becoming real and going out for the shift instead of myself… “Today” is a lie: it is 3am, I have less than two hours before the next shift. And even if it was 3pm, it doesn’t matter it’s daylight outside, since I’ve been into this muddy night for so long now.

Childhood is so close. I used to go to school just 5 months ago. High school was kind of boring, especially with all the rich, spoiled girls from my class. They’d brag about the newest smartphone and if I happened to pass by, they’d just stop talking and stare at me condescendingly. Shortly before I dropped out of school, I noticed their half-patronizing, half-envious look. I guess they didn’t get it how I could go out with him.

Him. Pavel. First man in my life. Sounds totally surrealistic now when I think of the tens of men every day on the road where I spend my time. I used to be fifteen, today I have no idea what “age” means. I had hopes, dreams for the future. You know, the cheesy ones teenagers from Eastern Europe generally have. I’ve never known my father; mother doesn’t talk about him. She’s not the talkative kind anyway. She did her best to ensure we have something to eat and wood for the winter. In exchange, I had to go to school and have good grades. Sis’ left school long ago, she hardly knows writing and reading, but it is how it is: someone had to take care of Granny as we could not send her to the hospital.

Time is running out. I have 2 hours to sleep, eat and shower, the rest of the time I am out on the road with Anna. We share the same spot. There are a lot of clients here, we bring good money. In exchange, Pavel gives us as much heroin as we want. He always repeats we have all we need to be happy and we should be eternally grateful he cares for us.

Heroin is my way out. Earlier, I asked for more saying it is also for Anna. He looked at me with this cold odious look he gives me since I’m just one of his hookers; I said “thank you” twice. He doesn’t touch me anymore unless it’s for a slap or a kick if he suspects I’ve hidden a part of the money. It’s useless to regret the past now. I have my way out. My allowed resting time will never be over again.

The Ratiu Center for Democracy (Romania) is making great efforts to campaign against human trafficking. Photo: “Not for Sale” Campaign

Today is the European Anti-Trafficking Day. Although the text above is a fictional work, it is based on real stories [bg] of thousands of girls. Several thousands women are sold within the European Union (EU) every year, and in 90% of the cases they become sexual workers. One out of 4 such women comes from Eastern and Southern Europe, mostly Bulgaria and Romania [bg]. The general lie is that she’ll be working as a house cleaner somewhere in Western Europe. Upon arrival at destination, her identity papers are confiscated by the traffickers and she’s forced into prostitution.

Although the EU has already worked on a legislation to protect victims of human traffic, the current state is more of a wishful thinking than consistently implemented fight against: only 1 out of 100,000 potential human traffickers gets convicted every year. Despite EU laws, only few of the member states issue residence permits to human traffic victims. Psychological care is rarely given, dedicated shelters often don’t exist at all, and medical care is frequently limited to “emergency” cases. Poverty is the main reason for a woman to get into this vicious cycle but the way out is far less striking. Politicians are overly cautious disturbing such blooming gray economy [PDF], and this is pretty much for a reason as government officials are often involved. Thankfully, human rights defenders in Romania and Bulgaria challenge this globalized crime.

How long will we be patient with slavery this time?

—
“Loverboy” is the name of a Romanian movie that premiered in “Un certain regard” in Cannes Festival 2011. It was screened in Bulgaria on October 18 for the first time. The movie tells the story of Luca who becomes the pimp of his girlfriend.