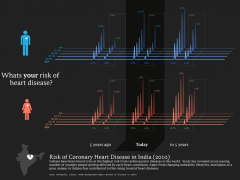 The rapid economic growth India is experiencing seems to have  hit Indian hearts with a vengance. It’s a hard and sorry fact that many young Indians are now dying of heart attacks  even though this may not make headline news the way India’s rural poor and emaciated children do.

The Indian male in his thirties is most at risk from heart attacks: 12 percent of the under 40 age group is affected as compared to 5.6 percent of their western counterparts. The 2011 India Today Saffola Study on 46,000 urban Indians reveals that 78 percent of men between 30 and 34 run the risk of a heart attack. The average age of heart patients in India is 45.

Genetics doesn’t seem to favour the Indian heart either. Apparently, Indian patients have narrower arteries which makes it more difficult to perform bypass grafting surgery, says Dr Devi Shetty, the cardiologist at Narayana Hrudalaya- a multi-specialty hospital in the southern city of Bangalore.

It’s agreed that Indians are genetically more prone to heart diseases, but diet, culture, stress, present-day lifestyles (with little physical activity and excessive drinking and smoking) all lead to obesity and hypertension which are, after all, proven triggers for heart disease.

Narrower arteries also have to bear the brunt of a culture that practices “forced feeding” – as a way of showing love and hospitality. “Thoda aur khalo” (have a little more) we always insist. Here, we’re supposed to take, “oh, now that you’ve put on some weight, you’re really looking nice”, as a compliment. We hear it all the time and we may not even be particularly thin.

Being dependent on others to do most of our work is not uncommon either. Most middle class families will have domestic help to do most of the housework, including cleaning, washing dishes, cutting vegetables, and fetching them from the market- if not the actual cooking. Preparing a cup of tea at the office, cleaning our car or our backyard, moving things around, painting jobs, etc are all delegated to the domestic helps. And don’t we get all stressed out when our help doesn’t turn up even for a single day? We fail to notice our expanding waistlines until they start to constrict our arteries and land us in hospital beds.

Though most Indians prefer to eat home-cooked food and take immense pride in preparing different varieties of  food, it’s not surprising that the demand for western fast foods  has increased since the early 1990s with  economic  growth and more disposable incomes, especially among younger people.

The country which is known to be traditional when it comes to eating out  with only the occasional indulgence caught up with this fairly new phenomenon after the  economic liberalization policy of the Indian government in the early 1990s. Some of the global fast food chains like Pizza Hut, Domino’s, Mc Donald’s, Subway, KFC, Papa John’s and the latest newcomer Dunkin Donuts, have seeped into the Indian taste buds. One of the key hot buttons for obesity and heart disease, fast food with its low nutritional value has now become a fad in the country. These days you often see a long wait for a table at most fast food joints in any of the major cities. There have been several public protests and campaigns against these food chains, yet they still operate at full tilt and they’re doing pretty good business too! While the developed world is going the organic way, India is going into reverse.

According to studies, India’s potentially productive years of life loss (the number of working years a country is deprived of when a citizen dies before the age of retirement) due to heart disease was 9.2 million years in 2000, which was much higher than China and the US. In 2030, India’s figure is expected to be a staggering 17.9 million years, compared to 10.4 million for China and 1.9 million for the US. This has now become one of the major public health concerns in the country as the cost of treatment for cardiovascular diseases (CVDs) is already high and will increase further if not checked in time.

Our impressive economic growth comes with a lethal price tag of lifestyle related diseases such as cardiovascular diseases (CVDs), diabetes, cancers and other non-communicable diseases (NCDs) and the burden they cause in terms of costly healthcare, and loss of productive years  and young lives.

The World Health Organization predicts diabetes and cardiovascular disease drains the Indian economy of US$ 23 billion each year in lost national income. Shouldn’t this be a wakeup call to the government and healthcare systems to introduce plans for long-term policies on public health that promote healthy lifestyles and warn against unhealthy habits?

While a family outing with a Pizza Hut dinner might be a question of choice and a sign of affluence, doesn’t the government that promotes foreign direct investment in fast food chains also have the responsibility to inform its people of what they are digging their teeth into? A slice of lost productive years? A slice of unaffordable healthcare bills?