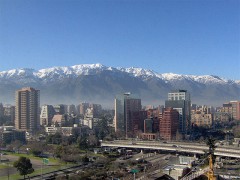 The new age of industrialization and globalization is giving rise to unforeseen migration patterns across the globe. It’s giving birth to an increasing  demographic movement towards urban and sub-urban areas. This sudden movement of the masses has taken our Chilean cities by surprise. Modern megalopolises are now under tremendous pressure to provide quality living conditions for their growing populations.

With urbanization on the rise on an unprecedented scale, middle income city dwellers, who make up most of the population in any megapolis, face a wide range of issues as our cities swell and boil over into megacities. In this transitional period, city dwellers, caught between the challenges and opportunities presented by urbanization and tend to question whether the rise of megacities is going to make their lives better or worse.

Today’s random and apparently uncontrolled urban growth is resulting in numerous problems like pollution, shrinking green areas, lack of proper housing, overburdened social and medical services, to name but a few of them. A close look at my home town -Santiago- made me realize that Santiago as a megacity is indeed facing all of these issues.

Santiago, the Chilean capital, is home to over 35% of the national population. It’s situated in a valley surrounded by the Andes Mountains, and the Mapocho river flows through it. This picturesque city suffers from an acute problem of thermal inversion and water contamination. Apart from emissions from cars and factories, dust particles from unpaved roads and eroded hillsides also make air pollution a matter of grave concern as the city is located in a closed valley much less open to rain and wind. Contaminated water bodies make the situation even worse with growing water pollution from upstream copper mines and smelter operations.

Until only recently, the Chilean government followed a pro-capital development policy. Accordingly, development of far flung areas has been negligible while Santiago has become the main economic center of the country. Economic advancement has fuelled migration not only from other, less developed parts of Chile, but also from neighboring countries. Such an uncontrolled demographic movement to the capital has resulted in major  housing problems and there have been various public protests on this issue. The Chilean government has tried to solve this problem by building more and more residential complexes – with adverse effects on the green zones surrounding the city. The food supply is also affected as Santiago expands, with conversion of agricultural lands to industrial and residential areas making the food supply chain longer and more expensive than ever before.

What’s more, the expanding city considerably increases the distances between home and workplace. In Santiago it is common to commute across the city for work or daily supplies of groceries. As a matter of fact, I used to spend 3 hours every day commuting to my previous job.

Natural calamities are a much bigger and greater risk which megacities have to face, and the burgeoning population worsens their impact on both society and the economy. Chile is a country prone to earthquakes, and the earthquake of 2010 is a classic example. It occurred in February 2010, and was one of the strongest reported quakes in recent times. The earthquake and tsunami in its wake devastated many Chilean cities and towns. Although the epicenter of the quake was far from the capital, it left Santiago without power, water supply and telecommunications for many days. Given the high demographic concentration and the centering of economic activities in the megacities, any such natural disaster is bound to have a catastrophic impact on the people and the economy of the country.

The chaotic growth of cities like Santiago could make the life of the ordinary man and woman unsafe, unhealthy and unremittingly hard; the challenge here is how to improve the quality of urban life and harmonize growth with ecology. Today our megacities can, and should, learn from global experiences. The effort of striking a balance between human development and its environment needs greater participation from experts on the environment, and public health in cooperation with policy-makers, and urban society itself.

But can our megacities develop such a mature development model, one which supports optimal living condition for the mass of people while protecting the environment as well?

This question is very much to the point – because if they don’t, the future of humanity and of our planet itself will hang by a very thin thread indeed.