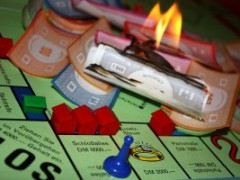 In early 2008 preceding the American economic crisis, former Mexican Treasury Secretary Agustín Carstens stated that the effects of such a recession on the Mexican economy would be “a simple flu rather than a pneumonia.” It only took a few months to prove how wrong he was.

The deep interconnection between Mexico and the United States of America led to a process of contagion that serves as an early warning to what we may continuously experience during the next years: unregulated Casino Capitalism and irresponsible economic management in developed countries dragging less-developed ones into the abyss. Unless structural changes are made, the economic future looks grim.

To protect from economic crises such as the one that hit Mexico in 1995, Mexico implemented a strategy that consists – according to Ángel Gurría Secretary General of the OECD – on the following four pillars: a solid fiscal position, a floating exchange rate, a considerable amount of foreign exchange reserves and a well-capitalized financial sector. Despite all of these macroeconomic preventive actions, the enormous interdependency in the region led to a domino effect that threw Mexican chips to the floor along with America’s plummeting economy.

In 2009, the Mexican economy decreased approximately 6.5% GDP largely because of the falling foreign demand for Mexican manufactured goods, a falling national private consumption, and lack of foreign investment. Remittances from the USA –Mexico’s second largest source of income – lowered 15.7%, and in the labor market, the growth rate of labor productivity decreased by 4.09%, while the unemployment rate increased from 3.2% during 2006-2007 to 5.2%.

Surprisingly, the effect of the crisis on migratory flows wasn’t so significant. Migration fluxes from Mexico to the USA became lower, but the expected massive return of immigrants to Mexico never happened. As many studies have proved –for example, the case of Tlacuitapa documented in Recession Without Borders by David Scott Fitzgerald, Rafael Alarcón and Leah Muse-Orlinoff–, most of the Mexican workers residing in the USA considered their situation to be still better than it was in Mexico.

“You can’t survive on a Mexican salary. I would rather collect cans in the United States than work in Tlacuitapa”, mentioned a 68 years old Mexican migrant for the book. Perhaps, the idea of moving from one crisis just to get to another isn’t a fully attractive choice.

But knowing that a crisis in the USA would directly slow down the Mexican economy isn’t really rocket science. In fact, the spread of an economic disease between slowing interconnected economies is the logical effect of a recession in any part of the world, and actually it seems that there might be no possible vaccine to crises apart from responsibility and development.

If the constant failure of the financial system is ever to be defied, developed countries must avoid the continuation of irresponsible economic policies generating enormous debts and be open to deepening cooperation in order to be prepared to act coordinately. At the same time, developing countries must struggle to maintain healthy finances and use growth and development as an engine for competitiveness.

For instance, in the case of Mexico, lowering the degree of interdependence with the USA would require diversifying its economy and pushing hard on the missing structural reforms. Today, the most urgent issues to deal with are the inclusion of private capital to the energy sector, renewed fiscal regulations, fostering innovation and strengthening the rule of law through mechanisms of transparency, law enforcement, controlling corruption, and creating a culture based on legality. Solving domestic problems are a prerequisite for acting effectively as part of a whole on the international stage.

It is time for the international community to remember that when it comes to finances, there is no such thing as lonely members. No one is immune, thus each of them has to internally and externally cooperate; otherwise, we will keep on experimenting outstandingly negative economic cycles under the responsibility of a financial system that has gotten out of control.