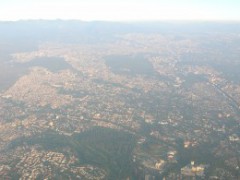 A dark layer of fog covers the city, but don’t worry, there’s no catastrophe, it’s just a normal day in Mexico City. Today the mountains are hidden behind that gray fog. Maybe tomorrow when the rain temporally removes that coat of pollution,  you’ll be able to see them on the horizon.

Mexico has made outstanding efforts to create the image of a green democracy among the international community. In 2010, Mexico hosted COP16, the annual UN climate change conference, while also being the first Latin American country to adopt a complete green plan for the next eleven years based on the UN Agenda 21. However, these achievements cannot overshadow the internal struggles Mexico is having within its own communities.

Mexico’s slightly unstable democracy makes it difficult to implement new green initiatives at home. Huge economic and social divisions exist among the Mexican people and make focusing on certain topics such as a green democracy a very daunting challenge.

When so much ignorance and poverty abounds in a developing country, it’s really difficult to argue about the importance of protecting our environment for future generations. The immediate present is the most important focus and, we need not only to educate and raise awareness but also raise living standards as an important first step towards turning Mexico into a green country.

If Mexico wants to really make its green agenda work, it should focus its attention more on programs such as the “Bosques de Niebla” communities in Oaxaca known for its sustainablity program for forests, or on creating a partnership with the USA for producing renewable energy in the near future (as was announced in May 2010). As Professor Duncan Wood from the Department of International Relations of ITAM has argued, Mexico is the world’s third largest producer of geothermal and solar energy. Working the market for renewable energy would be beneficial to the Mexican economy given that Mexico’s oil reserves are lower than ever and that finding new oil wells is a very complicated process due to the lack of funding and the political resistance shown to privatization.

Another economic possibility for Mexico to consider is ecotourism. When we analyze the monetary value of tourism for the Mexican economy and the magnificence of the country’s biodiversity, we can easily consider creating a sustainable industry out of it.

Sustainable development seems to be a great opportunity for helping third world countries grow up in the near future. Even so, it is important not to forget the people. Democracies are made by people, and, even though they can be good instruments for modernization, they can also be extremely harmful when there’s no common interest or shared purpose. With so much insecurity, ignorance and inequality in Mexico, other issues distract our attention and make us forget that climate change is just as important as any of them.

Environmental sustainability must be the first objective in introducing a green democracy, and education is going to be an important issue here in the long run. Some days ago I saw a household help washing the dishes and wasting a vast amount of water in doing so. I told her not to do it, and she answered: “Don’t worry, there’s still a lot of it in the ocean!”. A creative response perhaps, … but the mindset that lies behind it is one that we need to tackle.