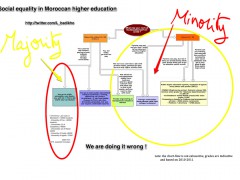 In her article on Work in the Developing World, Arrianna Marie started with an obvious truth: “The developing world has the potential for major economic growth, but first it must prepare its young people for the burgeoning jobs market“. I underline the second sentence as it is the topic of this local view. A recent study showed that only 8% of Moroccan high school graduates are ready for college and higher education. But what about higher education graduates’ readiness for the job market ?

With an average 5% growth rate from 2000-2010 Morocco is the fifth largest African economy. The paradox of this growth is that while creating jobs for a happy few hundreds of management and engineering graduates and thousands of low qualified young workers in tourism, off-shore services such as call-centers for European companies and other third sectors, the Moroccan higher education system is celebrated for its famous groups of Jobless Graduates – “Le Mouvement des Diplômés Chômeurs” – with their weekly demonstrations in front of parliament and their sadly famous self-immolations – years before the Tunisian Mohammed Bouazizi and still ongoing. The paradox of youth unemployment in Morocco cannot be understood without an overview of the different higher education systems in the country and the place occupied by the French language in each of them.

A bit of history

Early on in the previous decade, the Moroccan government announced a plan to make the Moroccan higher education system fit to produce ten thousand engineers a year by 2010 to satisfy the industrial needs of the emerging country. Yet anyone familiar with the Moroccan job market knows that very few of the engineers graduating from the Moroccan French-influenced  “Grandes Ecoles” find it difficult to get the right kind of job.

Morocco has a university tradition of more than 1,200 years stretching back to the foundation of the Al Quaraouiine university in Fes in 800 which is considered by the Guiness Book of Records and UNESCO as the oldest continuously operating degree-granting university in the world. During the Islamic Golden Age, the Western Empire including present-day Morocco and Spanish Andalucia produced names like Averoes, Maimonides, Avicene and Mohammed Al Idrissi, author of one of the first sophisticated Earth Globes. Morocco lost its leadership in sciences – like all Arab countries- in the 15th century and was colonized in the early XXth century for about 40 years.

Sixty years after independence from France and Spain, Morocco is today ranked by a World Bank report among the top 3 worst Arab countries in terms of education, sharing the shameful slot with Djibouty. In its sixty years of existence, the Moroccan education system has done nothing to tackle the  50% illiteracy rate, and if today 97% of children at the age of six go to school, 45% of them will leave before the age of sixteen.

The 177 000 young Moroccans that pass the Baccalaureate in 2011 can then look at their high school grades and the amount of money their families can afford to put into higher education to decide on their futures. Only when teenagers realize very high grades in the Baccalaureate does the social factor weight less heavily in their choices.

Alumni of the “Grandes Ecoles” are in high demand on the Moroccan job market as they are reputed for their excellent skills in managing complex projects and technical analysis. Unfortunately, none of the Moroccan Grandes Ecoles encourages their students to pursue research; the country is still failing to develop academic research.

The failure of the university system – jobless graduates

Designed to offer mass higher education, the university system churns out hundreds of jobless graduates, especially in the fields of human science. Their curriculum is said to make graduates fit for academic work, and not for corporate jobs, but as long Morocco has no major research programs, many will find it extremely difficult to find a job or not find one at all unless they accept a position far below their qualifications.

The “Movement of Jobless Graduates” was founded in the 1990s and is well-known for its repeated demonstrations in front of the Moroccan parliament which gather thousands of jobless public university graduates who demonstrate for what they consider as their right to be engaged in public administration. Some studies consider it as the most sustained protest movement in Morocco.

Moroccan universities and companies should make the right language choices. In my humble opinion  I think this should start by progressively abandoning French for English as the first foreign language and by strengthening the role played by standardized modern Arabic so that education can once more play its part in social equality (the part played by the French language in Moroccan education and access to the job market will be the subject of my next post).

Obviously PHE is exclusive to the upper-middle class and upper-classes and  oriented to corporate carriers as it responds to job market needs and guarantees employability to its alumni. Nevertheless, there are still private sector alumni without jobs. Even though private school alumni suffer less from unemployment than their peers in public universities, many have difficulties in finding work commensurate with the degree they hold; indeed many companies consider private sector degrees as weak and would rarely give the same kind of consideration to an engineer from a private school as they do to a graduate from an engineering Grande Ecole.

Some think that PHE far from lightening the burden on public higher education actually makes it worse: PHE employees are mainly professors in the public sector who become more devoted to their well-paid jobs in private schools and neglect the quality of teaching they provide in their public sector classes. For instance, there is a law limiting the hours of work allowed per week in the private sector to eight hours for professors enrolled in public education. This law is violated frequently by professors as we can see when we consider that maths and physics classes in engineering preparatory cycles each take more than 10 hours a week. Professors overwork in the private sector is one of the reasons for the loss of quality teaching in the public sector.

What do e-citizens think about alternative forms of  education ? What role is there for the French language ?

In early 2011, a group of Moroccan bloggers launched a public conversation on the Moroccan educational system, based in social media under the tag #EducMa. What started as a simple comment on a journalist’s article become an interesting debate that gathered a perhaps not representative sample but still a highly diverse group of Moroccan netizens as reported afterwards on Global Voices Online. This debate has seen much convergence of points of view, but  the most hotly debated issue on which there was no consensus was  the choice of language in Moroccan education, and particularly the role of  French: What place should French take in Moroccan education? Isn’t French just another social discrimination factor in access to the job market?