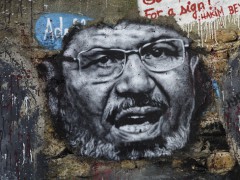 Call it a coup, or a revolution, or even a coup-volution, but whatever you call it the truth is that on June 30th millions of Egyptians went onto the streets demonstrating against Morsi and his Muslim Brotherhood rule. And that two days later the army could easily remove him from power in a move that again many Egyptians went onto the streets to cheer. It should be obvious then that Morsi and his brotherhood have committed many lethal mistakes that ended their rule just one year after he was elected as president and head of the state. In this post I will summarize them as the Morsi version of the seven deadly sins.

Painted portrait of Mohamed Morsi. Photo taken by Thierry Ehrmann, and published under a CC BY 2.0  license.

Greed might be the Muslim Brotherhood’s deadliest sin. They were victorious after every single election or referendum they took part in. However when it came to the presidential elections, Morsi won only by a very small margin. They must surely have known that they had inherited a regime riddled with corruption and with a history of failed governments, and so to win the nation’s trust in their fight against corruption, they promised many times before the elections that they would make a common front with their opponents to fight for the same cause. They also made promises that the constitution then being written would not come into force unless everybody agreed with it. Yet what did they actually do? They formed a government mainly with their own allies and used their parliamentary majority to form a committee unrepresentative of the political spectrum to write the constitution, a move that created widespread opposition. Their greed alienated their opponents and made it hard for any of them to side with Morsi as the legitimate president when the army decided to remove him one year later.

After greed, comes sloth. Although they knew that the main fuel of 2011 revolution was police brutality, and that all revolutionaries wanted the police force  to be restructured, they did nothing about it. Months before Morsi’s election, the police was brutally killing protesters in Tahrir Square under the protection of the then Islamist-dominated parliament. After the presidential election, the new government made absolutely no move to restructure the police force or the judiciary system. In fact, Morsi referred to the police at the revolution’s anniversary as the “core of this revolution”. How ironic that the very same police now stand against him, and refuse to protect the brotherhood when they are being attacked by normal people or thugs. Sloth was also reflected in their lack of vision in saving the declining economy or fixing problems like the fuel and electricity crises. Over the past few months, Egyptians have gotten used to queuing for hours in front of gas stations and living with regular electricity outages. These problems were enough to incite anger against Morsi and his government. But rather than address them, they put the blame on workers in gas stations claiming they were being bribed to turn off the power supply to make the government look bad, and they even claimed that taxi drivers were being paid to queue in front of gas stations with full tanks with the same intent.

There is a saying, “Choose your friends wisely, but choose your enemies even more carefully”. Morsi failed not only on these two accounts but even failed to choose the right battles. A few weeks ago, Morsi arranged a rally in a sports stadium in support of the Syrian revolution. The gathering was attended by his supporters and Salafy speakers who, instead of attacking the Syrian regime on political bases, attacked members of a whole Shia Islamic sect, by calling them names. They also called for sending jihadists to fight in Syria. The next day the Egyptian army was alarmed by what had happened. Then a few days later, in an unprecedented event, 4 Shia men were lynched on the streets by mobs. Some see this conference as the tipping point that made the army decide that Morsi could no longer stay in power. The army’s main ideology is based on protecting the state and its unity. The conference and its consequences harmed the state’s unity to such an extent that even Christians feared for their lives, wondering how they would be treated in a society that would not even tolerate Muslim minority sects. The fear of civil war was very much in the air.

In January 2011, people used to chant “Bread, Freedom and Social Justice” in their demos. The Muslim Brotherhood’s right-wing policies failed to address the economic needs of a country where 40% of people live in poverty. The price of the dollar went up, along with the price of people’s daily needs for food and housing. No reforms were introduced to public healthcare, transportation or education. The former dictator Mubarak’s regime had ignored these sectors, leaving them to the attention of the private sector, and Morsi just followed Mubarak’s policies step by step. People also called for minimum wage policies, yet what they got was less than what they demanded. The scarcity of foreign-exchange reserves after the revolution made consecutive governments look for loans from international lenders. They were required to lift subsidies on food and fuel as part of the loan agreement. Another symbol of gluttony is the fact that the top brotherhood figures are businessmen hungry for money, just like those of Mubarak’s regime whose policies have increased the gap between poor and rich and resulted in endless unrest in his final years in power.

The Muslim Brotherhood’s main ally were the Salafists, and their party Al-Nour. Salafist demands always focus on installing Islamic Sharia law in Egypt – laws that put restrictions on night clubs, censor pornographic websites, dictate dress codes for women, and regulate people’s private personal lives. Even so, the Muslim Brotherhood couldn’t fulfill all the demands of Salafists after they came to power, especially given the stricken state of the tourist industry and the general feeling of anger everywhere. They did try, however, to please radical Islamists by passing articles in the constitution which emphasize the state’s Islamic identity. They had promised to please everyone, from liberals to Salafists, yet they ended up pleasing no one. And they also failed in their attempt to present themselves to many of the Islamist masses as the sole protectors of Islam in the country. Later on, their political decision not to give any ministries to Al-Nour furthered the divide. Today, members of Al-Nour are in favour of the ousting of Morsi, something that would have been completely unimaginable just a few months back.

Despite their strength at the ballot box, the Muslim Brotherhood never had the media outreach their secular opponents enjoyed. They only had the Islamic channels supporting them. Instead of trying to reach out to their opponents and engaging them in dialogue, the counter message of the Islamic channels was based on hate speech and vitriol against opponents of the Muslim Brotherhood. In his last speech, Morsi attacked the owners of TV channels by name and made accusations about them that were unbacked by any evidence. Although the main goal of the Muslim Brotherhood was preaching and dialoguing with people, they failed when it came to the media. Rather than learning from others, they sided with those few media outlets which not one of their opponents respects.

Winning every single election they took part in has made the Muslim Brotherhood believe that they cannot be defeated, and has convinced them that everybody is on their side, even when they won sometimes by only a small margin. This sense of pride made it easy for Morsi to issue the constitutional decree last year giving himself supra-constitutional powers. It is the same sense of pride that prevented him from foreseeing the millions in the streets calling for his resignation. The army gave him a 48-hour ultimatum to reach an agreement with his opponents. However in his subsequent speech, he refused to offer anything that might calm the masses assembled on the streets. Morsi, the very same person who prior to being elected said that he will leave power the day he sees people calling for him to leave, lived in a state of resolute denial, refusing to believe that there were millions of demonstrators on the streets calling for him to quit even as he was giving his last speech. In this speech, instead of announcing changes to his incompetent cabinet, or the rewriting of the constitution – two of the main demands of many Egyptians – he kept on heaping familiar blame on unspecified ‘hidden forces’ messing with the country.

Egyptian Blogger and Tweep, currently doing my postgraduate degree in the University of East Anglia in Computer Science.