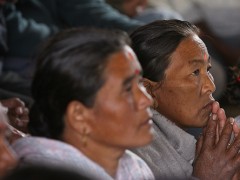 Health care is still a privilege in Nepal. Limited infrastructure and economic and social constraints combined with a lack of awareness force thousands of needy people to forego care. According to the World Bank, the country spends only 5.5% (up just 0.3% from 2007) of GDP on health care. Infectious diseases are one of the leading causes of death among the country’s poor and vulnerable.

Every year, especially during the monsoon season, cholera outbreaks are repeatedly reported, like a depressing routine.Increased access to clean drinking water and working toilets, hygiene awareness  and timely intervention could make a dent on the morbidity statistics. Malaria, HIV/AIDS, tuberculosis (TB), and influenza also claim many lives every year; although TB’s cure rate has significantly improved (now at 90% up from 45% in 1995).

Non-communicable diseases(NCDs) like diabetes, high blood pressure, heart disease are also a growing threat. In a recent report, the World Bank warned Nepal of a health crisis due to rise in NCDs,

“NCDs have already become the largest health burden in Nepal, accounting for 60% of lives lost due to ill health, disability, and early death. The burden of NCDs will proportionally rise in the future, in part, due to further aging of the population with 5.8% of the population expected to be over the age of 65 by 2025,”

The report also says that Nepal’s attitude towards smoking and drinking also needs to change to curb NCDs,

“Nepal is also susceptible to risk factors of NCDs including smoking and alcohol consumption. Tobacco use among women is the highest among the South Asian countries at 28% while smoking prevalence among youth is among the highest at 13% for boys and 5% for girls. The prevalence of hazardous and harmful drinking is also high at 39% for males and 30% for females.”

While NCDs like diabetes, high blood pressure and heart disease, and infectious diseases are getting attention – however unsatisfactory considering the scale of the problem – mental health is one area that is  consistently neglected.

The ten year long civil war which ended in 2006 inflicted deep physical as well as psychological trauma on hundreds across the country. Often restrictive cultural norms, disturbance of the social fabric by a massive tide of young people migrating abroad for work, and economic pressures are making many people anxious, and some need medical support. Unfortunately mental health resources are practically non-existent. The Global Press Institute says,

“As of now, Nepal has only one mental hospital and 18 hospitals that treat mental illness. The number of medical practitioners at these facilities stands at 51 psychiatric doctors, 11 psychologists and 48 nurses. Dr Rabi Shakya, a consultant psychiatrist at the Lagankhel Mental Hospital, points  at a chart in his office  saying, “the ratio of patients to beds is 71,177-1.”

Most of the psychiatric doctors and other mental health professionals work in the urban areas, which adds to the health care disparity facing the rural poor. For women, already facing gender bias, the gap is even wider. It comes as no surprise then that suicide is the leading cause of death among Nepali women aged 15-49.

It is clear that Nepal’s health care system cannot be complete without addressing the mental health gap.The Government and the private sector need to invest in a more integrated approach towards health; and also address negative social perceptions about mental health patients.