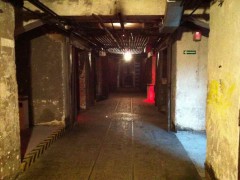 When arriving at the venue for the Open Government Data Camp 2011 in Warsaw early in the morning, I wondered about the huge collection of old factories that are now used as an office center for smaller startups. The Camp itself was held in an old factory with a huge inner space; it’s usually used as a techno club. It was a really amazing venue for discussing internet issues, even though it was a little bit cold.

Rufus Pollock from the OKFN opened the Open Government Data Camp (#ogd) by introducing the work of the Open Knowledge Foundation. He explained in his (as always) very emphatic manner why it is important to build up a common understanding of, open data and open records. In his view (and not only his view) it is essential to build up a community that will spread the data and the knowledge.

Carl-Christian Buhr from the European Commission introduced the work of commissioner Neelie Kroos. Because of the extreme fragmentation of EC databases, the Commission is going to open up a portal for European data next year (we will wait and see…). The supposed aim will be to have a single (open?) data market. Open questions are, of course, (1) the business model for such a venture and (2) the specific workings of the different tools.

Greetings from the EU. Source: fc_org

Ellen Miller – co-founder and executive director of the Sunlight Foundation – introduced the work of the Sunlight Foundation, saying that open data is a public good that is inefficiently used. Technology is not a slice of the cake but it is the pan. The tasks and mission of the Foundation are to construct databases that make it easy for activists to use the data they are interested in, to foster communities and to guide politicians as to how they can to handle open data.

Please find below some awesome examples of their work:

The combination of citizen demand, government data and a developing “library” of business models means that this issue will continue to grow, says David Eaves. David was very engaged when talking about the win-win-situation of government, citizen and business. But from my point of view there are huge differences between the private/public and data-security issues in the US and the EU. And what about making business out of public data? What about implementing open data into the formal decision making process?

Philip Ashlock told something about how Civic Commons wants to act as a catalyst to bring the community together and, then, to act as a facilitator, helping communities touse the data. Ashlock gave a broad overview of current open-data projects worldwide. But he also asked the following important question: will we have to invent the wheel again and again? Why, he asked, is there such a huge focus on the supply side of the data market? From my own point of view, we need a more process- and demand-oriented view. It is not really a differentiated perspective to show what is technically possible.

A somewhat different perspective was presented by Hanif Rahemtulla, Al Kags and Jay Bhalla from Kenya: they reported that they started by training citizens beforehand to use open data in a productive way. Strong cooperation between the Kenyan government, the World Bank and some companies underlay the preparation of the open data platform in Kenya. From their point of view, users should always remain the focus of all open data activities.

Besides meeting with colleagues from the Sunlight Foundation, I had an interesting talk with Ann Frisch from Nonviolentpeaceforce.org. She explained to me how important it is to have access to government records in order to find solutions for political or societal conflicts. But she mentioned as well that it can also be dangerous to handle these open records and open data, because it brings light in former intransparent governmental decisions. This talk was very inspiring because it showed me the concrete impact of open data on conflicts and societal development.

Last, but not least, I took part in a very interactive session about open-bank apps organized by Simon Redfern – yes you heard right. It was a discussion about a special app to show all banking activities of major institutions. It was not about hacking Goldman Sachs. Instead, it was about publicizing in an app the banking activities of organizations for which transparency is an important component of their activities (for example NGOs which want to show their reliability). The session was a little bit challenging because the temperature late that day was under 10 degrees…

What are my conclusions post-camp?

a) There are two completely different discussions in the US and the EU. In the US, it is more about using as much (open/public) data as possible, with the primary object of making money from it. The work of the Sunlight Foundation is a very important exception to that rule. We should take a closer look at this work, because we are lagging behind that state of mind in the EU a bit. In the EU, we are currently very focused on the data-related public/privacy issue. We should take care to catch up to the US in this regard, resolving the public/privacy issue and moving on to implementation questions
b) The discussions (not so much the plenaries) were very “dominated” by native English speakers. Of all the sessions in which I took part, only one or two discussants came from non-English speaking countries. What could be the reason for this? If one looks at the ordinarily international scene, that fact is very surprising. Although it’s not cool to raise such an issue, I feel I should mention it nevertheless. Perhaps I’m not the only one who is seeking an answer in order to reach a really global discussion.
c) From my personal point of view there is still a missing link between the open data debate on the one side and the people and the politics on the other hand. Despite this missing link, I am looking for technical or legal opportunities to implement concrete internet or open data-based tools directly into the political decisionmaking process.