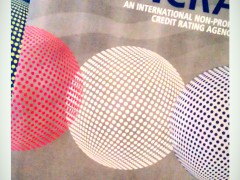 At its fifth annual economics conference, System Upgrade: Time for a Global Economic Re-boot, the Bertelsmann Foundation announced INCRA’s—its new independent non-profit credit rating agency—sovereign debt rating for the United States.  Over the past two years, the Bertelsmann Foundation has been working alongside a variety of experts to develop INCRA as an alternative to the for-profit model of the big, sovereign-credit rating agencies.

The Bertelsmann Foundation first introduced INCRA at last year’s conference. The professed need for an independent and non-profit agency was to offer greater transparency, reduce at least the perception of conflicts of interest in an issuer-paid system, and provide a more robust and higher quality rating. The model, argued Bertelsmann’s Executive Director, Annette Heuser, would help ensure that the markets received a more accurate assessment of both a country’s ability and willingness to meet its debt obligations.

One of the key elements of INCRA’s rating model, presented by Heuser, Vincent Truglia, and SAIS professor Michael Mandelbaum, is its “forward-looking indicators,” a set of indicators that highlights the willingness of a government to repay its debts, given political and social constraints. These indicators include the rule of law, transparency/accountability, and social cohesion, among others. According to the panelists, it is these forward-looking indicators that are more important for high-income economies, such as the United States, that already have sound macroeconomic statistics.

Accordingly, it was the forward-looking indicators that drove the United States’ rating, which INCRA scored at AA+ (this can be compared to Fitch Ratings (AAA), Moody’s (Aaa), and S&P (AA+)). Truglia, former managing director of Moody’s sovereign ratings unit and lead expert for INCRA, argued that the United States’ macroeconomic condition was deserving of an AAA, the highest rating possible.  The United States has the world’s largest economy, a strong legal framework, a strong and productive manufacturing sector, a robust culture of innovation, the world’s best higher education system, deep capital markets, and is not part of the Eurozone.

However, its politics, particularly recent events involving the fiscal cliff, budget sequestration, and congressional battles over raising the debt limit, is a tremendous drag on the United States’ score. While the country has few, if any, limits to be able to service its debts, the political stalemate in Washington raises considerable uncertainty about the willingness to meet its obligations.

Professor Mandelbaum, an expert on American politics, led the discussion on the dangerous political environment and the lack of confidence that it bestows. Political polarization could, in his opinion, lead to a self-inflicted default. While conflict is good, even necessary, in the American system, Mandelbaum extolled that today we may have “too much of a good thing”. The committee was concerned that the partisanship in Washington could slow, or even stall, necessary legislation. While Congress has managed, over the past couple of years, to reach last minute deals on a number of occasions, there is a high level of uncertainty about the continuation of such zero-hour accords in the near future. Any one failure to reach a timely agreement would result in a default, a proposition that worries markets.

This led the rating committee to conclude that although default is unlikely, it is conceivable. Despite the sound macroeconomic fundamentals, the political climate necessitated a ratings score one full step below the maximum.  This rating places the United States alongside France but behind Germany, which was the only country of the six rated thus far to receive an AAA. The committee gave the United States a stable outlook, arguing that it is unlikely in the near- to medium-term that there will significant changes in either the political or macroeconomic landscape to warrant a rating change.