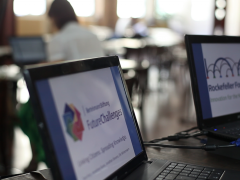 Moving ahead to new horizons might be a good project title for the happenings in the first week in July in Berlin which gave us the opportunity to step back for a moment, examine what we normally take for granted and venture a look forward as well as a glance back on roads already travelled.

This last eventful week saw planning meetings, the Future Day (from which the photos are taken) and our yearly meeting with the regional editors of the fc_org blogger network with people coming from the USA, Pakistan, India, Australia, Belgium, Romania, Ghana, San Salvador and Brazil.

The project team was formed three years ago with the aim of using the fc_org platform to focus attention on the complex theme of global interdependencies. Given that politics with its mostly outmoded decision-making channels is no longer capable of dealing with increasingly dynamic and high-speed global contexts, we set out to use fc_org to bring together the know-how of experts and civil society in the shape of bloggers and offer the insights thus generated to policy-makers.

Three year later we can now report that – quite independently of our own project – this issue is increasingly coming to the forefront which shows that the direction we embarked on back then was largely the right one. The financial crisis, the political and academic debates sparked by the euro crisis, the Arab Spring and the rise of what has come to be known as the “enraged citizen” in western democracies are all symptoms of the increasing inability of political and economic processes to respond to the interdependent global challenges that lie ahead.

Insecurity on the global level is making deep inroads all around whilst nobody so far seems to have any clear idea of what methods can best be used to understand and deal with this new quality of challenges.

In the course of our activities we have established a worldwide network of 150 bloggers in 60 countries and gained the support of renowned partners such as the Rockefeller Foundation, the Club of Rome, the United Nations and the Kiel Institute for the World Economy. Our Facebook community has over 6,000 fans. In Germany itself we have worked together with a host of national partners to initiate innovative formats like the Open Gov BarCamp. And finally in 2012 we were lucky enough to win the German Award for Online Communication in the “internal project communication” category.

Even so, two key aspects have still not received sufficient attention. Firstly, how to encourage people to comment usefully on blog posts. We might have the examples of emotionally charged debates on SPON or Welt.de before us, yet it has proven difficult to launch an emotionally laden debate on the complex issues of global interdependencies and particularly one which doesn’t lose sight of what such a debate intends to achieve. Secondly, we still haven’t succeeded in launching a truly crowd-based approach to the shaping and refining of the positions we advocate.   These insights will lead us over the next few months to embark on a number of adjustments which shall serve the further development of the platform.

We will limit our focus to a number of key issues. The holistic approach that seeks to present a 360 degree view of global complexity might indeed be very laudable but it is not one that tailors well with the usual ways users have of reading and interpreting the world. Building on the experiences we have made when dealing with demographics of identifying finance as the key framing issue, we shall now filter out economic globalization and global governance as the key themes of global megatrends and put the spotlight squarely on them. The combination of the economic core at the heart of each action and the question of how regulatory mechanisms may be created on the global level or how they arise autonomously is from our standpoint THE decisive question concerning the future and one whose answers will largely determine the shape of the global future.

To give an example, there is no difficulty in subsuming pandemics both under their globalization aspect (global travel, pandemic-induced restrictions on movement of goods) and under issues of governance (dealing with pandemics on the supra-national level). Such a redefined focus enables us to explore these issues in great depth and thus to canvas for a target group clearly delimited by the issues at hand. Furthermore, such a focus also facilitates formulation of specific proposals for action thus reducing complexity to manageable proportions. And finally such a redefined focus offers the potential to increase the gravitational pull of the platform for further contributions.

Based on the first experiences made with the implementation of an open solution at the Global Economic Symposium we shall also considerably enlarge the scope of the crowd-based approach in the elaboration of substantive positions. The conventionally placed commentary function as used thus far shall be extended with a module that enables collaborative work on substantive positions. Introduction of this module is informed by the simple fact that commentaries in general tend to be little more than the voicing of dissatisfaction. When they intend to offer and do actually offer constructive insights, more often than not they fall wide of the mark because up to now no provision whatsoever has been made for integrating such productive participation in the decision-making processes of economic and political decision takers.

With this on-going evolution of our project we want to put a much stronger focus than before on transparency and participation. At the same time the debate on sustainability will serve as an overarching core element that ideally couples the twin aspects of globalization and global governance.

*All photos by Florian Kapfer. Thanks go also to Bock & Gärtner.