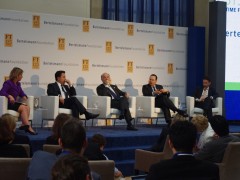 It seems the worst of the eurozone crisis is over, at least according to four of Europe’s leading finance ministers, who spoke this past Thursday at the Bertelsmann Foundation’s annual conference, System Upgrade: Time for a Global Economic Re-boot. The French minister of the economy and finances, Pierre Moscovici, extolled, to considerable positive reaction, that “There is no more existential crisis in the eurozone.” However, despite the positive spin, the panel failed to offer any meaningful prognosis for the rebound of Europe. Instead, the long-running tension between national sovereignty and greater European coordination remained a stubborn undercurrent.

The fact that the conversation did not, as it did last year, revolve around the question of whether the euro project was doomed, was one of the more positive aspects of the discussion. While the finance ministers this year, who represented Turkey, Sweden, the Netherlands, and France, may have just been posturing for political reasons, they paid little attention to this existential question, which has been troubling policymakers and markets for the past few years.

Instead, the thrust of their discussion revolved around the direction of reform—particularly in regard to fiscal policy, banking union, and austerity—and the potential for expansion. While the panel, given its members, was infused with a level of diplomatic finesse, there seemed to be discord on how to best fix the eurozone. For instance, the contradiction of a single monetary policy with multiple fiscal policies was clearly recognized; however, the panelists, who all agreed on the importance of the single currency, were far from definitive on how to reconcile the problem.

What was clear was that the long-standing tension between state sovereignty and greater pan-European cooperation remained. The politicians were able to speak nicely about the need for coordination across Europe, but were forced to recognize that national constraints often dominated policy. The Swedish minister, Anders Borg, for instance, rhetorically supported the euro, while lamenting the dismally low rate of support for the project in Sweden. Ali Babacan, the Turkish finance minister, expressed a desire for his country to eventually adopt the euro, although he articulated reservations as to the timing.

Austerity was another primary area where a national focus appeared to trump greater coordination. Moscovici defended France’s refusal to meet pledges to reduce its budget deficit to 3%, part of a European-wide attempt at austerity, by blaming national economic concerns. Both Babacan and Borg deftly refused to criticize the decision, spinning arguments about how each country’s situation was unique. However, such state-centric excuses undermined the highly-emphasized necessity for mutual cooperation. The finance ministers seemed to want it both ways—flexibility to drive their own policies at the national level, with significant coordination that will bind Europe together and contribute to everyone’s growth.

As is wont to happen when politicians begin talking in a public setting, little in the way of definitive policy was offered. Unfortunately, national politics continue to dominate in Europe. With such a weak supranational structure and diverse and divisive national interests, it seems unlikely that Europe will do anything but continue to plod along at the painfully slow pace of the past few years. While it was refreshing to see that the European ministers were united in the permanency of the euro, which provided a level of confidence that the project may still succeed, it is clear that considerable work is needed to extricate the inchoate superstate from its current morass.