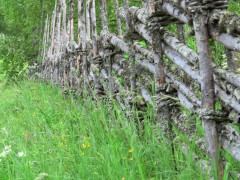 Day Three of the Tällberg Forum dealt with the topic of leadership in a globalized complex world. And throughout the day the palpable air of uncertainty and tentativeness that hung over experts and ordinary non-experts alike was very striking – regardless of whether speakers were attempting to approach globalization in analytical, spiritual or (social) psychological terms. In our own session we had suggested a combination of data-supported analysis and personal stories as a way of coming to grips with this difficult and elusive issue from two sides.

Thoughts are free (and can’t be fenced in)

Participants in the various sessions were quick to reach a consensus that despite the globalized problems they were facing and regardless of their respective cultural, religious, national and regional backgrounds, people across the world still shared universal values.

Even so, in order to avoid conflicts or successfully resolve them, at the end of the day what we need is a completely new catalog of requirements for an approach grounded in Leadership 2.0. Empathy, sensitive communication skills and openness are the benchmarks of this new understanding of leadership and they apply equally to the personal, institutional and corporate level.

There is a variety of ways for inculcating such skills – ranging from switching the school curriculum away from pure performance to more values-based method teaching to expensive management courses and the self-disciplining effects of activity in the social media.

But whether in our own session – where we took a more analytical sober view of the issue – or the session with experts for compassion and spirituality or in the session with the publisher of a magazine that only prints positive upbeat news, all participants had one thing in common – their clear rejection of a “business as usual” and nationalistic or egoistic approach to the way decisions are made.

The really fascinating thing here was to see how values are shifting seemingly independently of cultural and national backgrounds (or was this just the effect of the filter bubble?). Status, materialism, egocentricity, rivalry and competiveness all seem to be values and mechanisms on the decline while – driven by the flat hierarchies or lack of hierarchies in the internet (it all depends where you’re looking!) – (positive) empathy, emulation, communication, respect for differences and the new emphasis on general transparency are all values and mechanisms that are increasingly coming to the forefront at present.

But what does all this mean for people who aren’t privileged to make decisions in institutions, who have to survive on one dollar a day, people who’ve never been able to leave their village or who fear being crushed to death if the decrepit factory they’re working in collapses, people who live lives of poverty in rich countries, people who must bear the brunt of the aliments and sicknesses caused by a ruthless means of production?

And what does this possible shift in values mean for decision-makers in politics and business? Under such circumstances is a war waged against a country’s own population, or oil pollution of yet more tracts of land in Nigeria, or the go-ahead for production of cancer-causing products or ocean-polluting plastics at all conceivable as the result of one person’s decision?  Or to turn the question round: aren’t perhaps present-day conflicts and the predatory exploitation  of people and the environment merely the result of an individual personality disorder that first makes such decisions possible that bring such dire consequences with them?

I’m not so sure about this (so in the catchphrase of Harry Dim, the rat in the famous TV children’s series, you’d better go get your parents’ advice).

Conferences which discuss issues like the above within the context of a possible filter-bubble (and academic training is no shield against the filter; on the contrary it could well strengthen it) do indeed serve a useful purpose even in a digital age. It’s conferences such as these that first offer an opportunity for the transformation of values to be disseminated across the circles of key present-day decision-makers. Even so, we should still be mindful to amplify the multiplier effect even further by 1) extending the media transparency of the agendas discussed via the internet, and 2) basing ourselves on online communities and engaging with opinions from outside the filter bubble in a concerted proactive attempt to include them in the format.

Once a consistent level of openness is reached, we can then attempt to bring the two groups into dialog in a joint effort to tackle global challenges.

Day 2: Globalization – a mixture of data and personal stories?

Thanks for all translation work to Paul Morland who once more did an awesome job!