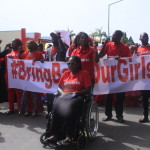 I remember Monday the 14th of April 2014 like it was yesterday, waking up to the horrible news about yet another bomb blast, this time in the super busy Nyanya Motor Park. The explosion went off inside a car about 6.55am, the period with the highest traffic in the area as commuters from satellite towns and neighbouring states board vehicles headed into the city center. That April morning the Boko Haram terror group had hit Nigeria again.

While the government, international agencies and witnesses argued on the body count, families grieved as they shuttled between the many hospitals and the morgues in search of their loved ones. Some of them would eventually settle for empty caskets, or a body part or two. That was the intensity of the blast.

I remember the outrage, and the confirmation that Boko Haram was not just one religion against the other, but a sect of murderers who had twisted their religion to justify mayhem against the entire country/region.

Far away in Chibok, in Borno already ravaged by Boko Haram, over 300 girls drawn from secondary schools (closed because of security concerns) around the state, went to bed in hostels at Government Secondary School after a day of writing WAEC exams.

Not for long though. Insurgents invaded the school that same night, and carted away 279 girls aged 14 – 18 in one fell swoop. In one of the #BringBackOurGirls rallies I attended, I learned one parent was missing three family members (two daughters and a niece).

The government’s first reaction to the news of the abduction was denial. First denial that any girls were taken, then the arrest of some of the teachers and a parent by First Lady Dame Patience Jonathan, then the accusation and counter accusations between the two major political parties on who was behind the kidnapping began, and then the unforgivable slip from the military that they had been found. All fingers pointed and to this day still point towards Sambisa Forest, with different people giving different accounts of its density/porosity being the reason why an onslaught against the kidnappers has not resulted in the rescue of the girls.

The first #BringBackOurGirls protest was on the 30th of April, 2014, led by Hadiza Bala Usman, Aisha Yesufu, and Obiageli Ezekwesili. I remember getting drenched as we marched, as we sang, as we rallied support and demanded answers from the National Assembly.

Hashtag activism brought to life, fueled by anger at the brazenness of the abduction, the reaction by government, and most important, the desire to reunite these children with the parents and families. And it exploded, all around the world. From parents, to school children, politicians (including First Lady Michelle Obama), celebrities, artists, people all over the world stood still for the campaign.

President Goodluck Jonathan first addressed the nation about the girls on the 4th of May, promising to do all in his power to ensure their rescue. Soon after, the Safe Schools Initiative by the Federal Government in collaboration with the international community was launched to ensure that children in the three least educationally developed states (Yobe, Adamawa, and Borno) got an education in a safe, terror-free environment. Activists including Malala Yousafzai also came to Nigeria to advocate for the speedy rescue of the girls.

More than 365 days after that abduction, the girls are still missing. A total of 57 have escaped at various times, and a number of them (purportedly taken from Chibok) were confirmed pregnant. Some parents of the girls have passed on from sorrow, and Boko Haram is still targeting schools. Over 48 children were killed when a bomb exploded on the assembly ground of Government Technical School, Potiskum, in Yobe State. Some of children killed were only 11 years old.

14th April 2015 was the anniversary of the abduction. Ban Ki-Moon, Secretary-General of the United Nations, said,”Over the past 12 months, Boko Haram intensified its brutal attacks on boys and girls in Nigeria and neighbouring countries. Hundreds of thousands of children have been displaced from their homes, and deprived of their rights to live and grow up in safety, dignity and peace. Boko Haram’s killing, abduction and recruitment of children, including the use of girls as ‘suicide bombers’, is abhorrent.”

In Nigeria, there was a commemorative march by the Bring Back Our Girls Community, silent, with red tape over their mouths. Co-Ordinator Oby Ezekwesili said, “We decided that we have spoken so often about this that we’re just going to try to show the people what it feels like … when your voice is taken from you, which is what the terrorists have done to our daughters.” Candles were lit later that evening to renew hope and faith that the girls would be rescued and reunited with their parents.

I agree and lend my voice to Malala Yousafzai’s letter to the missing girls – “I look forward to the day I can hug each one of you, pray with you and celebrate your freedom with your families. Until then, stay strong and never lose hope. You are my heroes.” In a Northern Nigeria where only 5% of the girls go to school, they are heroes indeed.