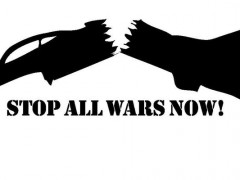 Stop all wars Now! By Horste. via Wikimedia Commons. [CC-BY-SA-3.0]

Working in the media, especially in the critical period we are now going through in Egypt, I witness and report on many painful incidents. Death, torture, rape and child abuse are becoming part of my daily life. The painful incidents we report on are read and seen by people, and eventually they become part of their daily life, their daily tragedies.

However, there are special incidents that leave us in much more pain than our daily tragedies …

A few weeks ago, my best friend’s mother died. She was suffering from cancer, and she left her family and all of us in enormous pain and grief.

You might think that there is nothing remarkable about such a story, especially for a person whose work involves reporting death and torture each and every day. However, being very close to the whole case of my friend’s mother and the sad consequences of her death drew my attention to a serious fact, a fact that I had not recognized before.

This fact is that the pain we suffer following the death of people we love does not result exclusively from diseases and natural disasters. We also play a key role in inflecting such pain on others by killing or discriminating against them over religious and cultural differences. These differences often lead to war, discrimination, displacement, and death.

This fact is as painful as death itself, and it inevitably raises some fundamental questions:

Are wars over differences in culture and beliefs really unavoidable? Shouldn’t we focus instead on finding cures for the deadly diseases that take forever the lives of people we love? Shouldn’t this be our main focus instead of waging wars that lead to nothing but more death and ever more miserable conditions? Don’t all beliefs call for the simple notion of peace?

In fact, the answer to the first question is debatable and I’ve tackled it in one of my previous articles, but the idealistic answer to the two other questions would be yes. Yet conflicts over beliefs and cultural differences have occurred in many regions of the world from Jammu and Kashmir to Northern Ireland and the former Yugoslavia.

Today, more conflicts are being waged for the very same reasons. In my opinion, the current conflicts in many Middle Eastern countries are also of a cultural/religious nature.

In Iraq, Sunnis, Shiites, and Kurds are fighting over differences in beliefs and ethnicity. Their combats have led to the destruction of Iraq’s infrastructure and the displacement of many Iraqis outside Iraq.

In Syria, the current bloodbath results from Sunni – Shiite conflicts of interests, while the people of Syria are the ones who pay for it through death or displacement. A few days ago, a friend of mine told me the story of a Syrian engineer he works with. The man left Syria for Egypt a few weeks ago to escape obligatory military service in Syria. He explained that he could not possibly join the Syrian National Army because if he joined and fought for it, he would be killed by the Syrian Free Army, and if he refused to fight for it, the Syrian National Army would brand him as a traitor and kill him. This man is an example of the consequences of wars, which craft human miseries by the hands of humans, whereas diseases and epidemics are killing more than enough people already.

Such conflicts are not confined to Syria and Iraq, although they are at their most violent there. They also exist between extremist Islamists and secularists in Egypt as well as Tunisia, where Shukry Belaid, the famous Tunisian left-wing figure was assassinated by unknown men (allegedly Islamists) a few days ago.

The same happened in Egypt back in the 1990s, when an illiterate Islamist assassinated Farag Fouda, the Egyptian secular intellectual. The illiterate man drew justification for his shameful act from a Fatwa (religious decree) issued by Sheikh Omar Abdel Rahman, an extremist Islamist preacher currently imprisoned in the U.S.

Another remarkable issue is the use of energy. Huge amounts of electrical and nuclear energy have been squandered in countless violent conflicts and wars. Even before these sources of energy were discovered, people used coal and wood to make fires which they used in fighting enemy tribes and communities. Yet energy is also needed for the operation of all medical devices, and huge amounts of power are required to run the sophisticated devices used in the detection and treatment of deadly diseases.

A peaceful human mind should consider using energy for medical purposes, rather than for waging war on fellow humans beings. In this way energy would be utilized to save lives rather than end them.