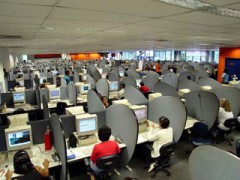 When we were students and read or heard about some multinational company outsourcing its business processes to India, it always excited us because it meant more chances of finding a well paid job.

Go to any big Indian city, and you will find people directly or indirectly associated with outsourcing software services, the services industry or research and development.

In the modern business world, outsourcing has proved to be the most popular and cheapest way to increase productivity and efficiency, and India has become the most favored destination for the companies to outsource their business processes. This has not only benefitted the Indian economy by the direct creation of millions of jobs, but other related industries too such as infrastructure, travel and telecoms – resulting in increased revenue for the government. As the companies involved in outsourcing earn bigger profits, they offer higher pay packages and attractive employee benefits to retain their talent pools.

The Indian middle class is reaping all the fruits of the liberalization started in the early 1990s. However, if you drive across any Indian city you cannot fail to notice the people living on the roads and the slums sprawling next to the shiny skyscrapers. Economic inequality seems to be widening, and it’s almost impossible to imagine just how big the gap between the rich and poor really is. The government needs to implement intensive reforms if it is to bridge this ever widening gap.

The open market and liberalized economic system have given us opportunities the like of which we have never seen before. But what we fail to appreciate is the lack of sustainability in this outsourcing boom.There are three main reasons why the future of this economic outsourcing-supported boom looks gloomy:

1. The rising inflation rate is pushing the people to search for higher paid jobs, and companies are increasing their salary rates in an effort to retain their talent pools. Hence, India is losing its cost competitiveness.
2. Since outsourcing is city-centric as are other supporting industries, a large number of people migrate to bigger cities for employment. Lack of infrastructure and increases in real estate prices are bringing the large Indian cities to the brink of total collapse.
3. Last – but certainly not least – the Indian government has totally failed in managing and developing the largest human resource pool in the world.

Being the second most populous country in the world is  the root of all the problems India is facing today, like unemployment, food security and poverty to name but three. However, as they say, it always pays to make your weakness your strength. In the case of India, a one billion plus population provides at least one advantage, and that is a never ending supply of cheap labor. According to a report by the United Nations Department of Economic and Social Affairs, the proportion of older people in the world’s population is continuously increasing, especially in the developed world. While  other developing economies are still struggling to reach the level where they can leverage the opportunities opened up by globalization and the open market, India has the immense advantage of having a large army of educated individuals. Nevertheless, education is no longer an automatic passport to employment as being educated does not mean you are bound to get work on  today’s job market where skilled professionals are at a premium.

Nurturing the masses with the right type of education is the need of the hour in India. The Indian education system has not evolved with the times and has failed miserably in delivering quality education to millions of children. India needs to develop an education system which not only universalizes  education but also develops skilled individuals. Along with education, we also need to identify ways to harness human resources to ensure a supply of cheaper labor and maintain our cost competitiveness in the world’s outsourcing market. Lastly, the development of new centers for outsourcing business will help in reducing the pressure on the bigger cities whilst also providing numerous employment opportunities in the remoter regions.

We cannot afford to forget that it is the availability of cheap skilled labor and an adequate infrastructure which has made India the hub of outsourcing that it is.