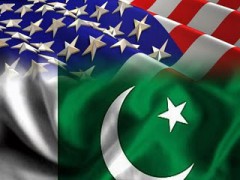 To say that the Pakistan-US relationship is one of the great modern voluntary mistakes of the region is not an understatement. What is this relationship based on? What are its foundations? Is it really necessary? Unfortunately, it is not. Coercion? Threats? Muscle flexing? All three? Yes. This may be partly or entirely true – but that is irrelevant here. What is relevant is the fact that this is the common perception held by the mass of people here.

The people of south east Asia look at the world through a different colored glass than those sitting outside the immediate region. It is the realization about how divergent these two sets of views are which actually puts the idea of a Greater We in a truer and more realistic perspective. Ideas are noble, there is no doubt about that. But they can’t just be conceived and then realized; they require tributes of sweat and blood – and once the realization about how deeply segregated humanity is sinks in, the futility of such an idea becomes starkly apparent.

What are the dynamics of the US-Pakistan-relationship? How is it perceived? Here’s a short rundown. Pakistan is playing a semi-rehash of the role it played in the last Afghan war; only, this time it’s fighting the Taliban. The US, on the other hand, is replaying exactly the same role it played in the last war – at least as far as Pakistan is concerned. Pakistan will continue to receive military aid for as long as the US has a ground presence in Afghanistan. After the US withdrawal Pakistan will be at the mercy of its hostile neighbors with its economy ravaged by war.

This indifference is already apparent in how Pakistan is treated in international forums and by the US in particular. The collective coalition losses for the war in Afghanistan and the 11th of September amount to less than 6,000 lives. Pakistan’s military casualties alone amount to well over 5,000 lives whilst its civilian losses have crossed the 35,000 mark. The net death gratuity for one US soldier amounts to USD$ 400,000. Is a Pakistani soldier’s life valued in the same manner or with the same respect as a coalition soldier’s? And yet, despite all the blood sacrificed by Pakistan in this war, what respect is it accorded? None whatsoever. Today it is easier for a Pakistani to walk through a rioting mob than it is for him to pass through JFK. US foreign policy itself treats a ‘valued’ ‘strategic’ ‘ally’ like Pakistan in a similar manner to the way it treats Afghanistan.

We are expected to exorcise – all by ourselves –  a demon that the collective might of a 130,000 strong ISAF/NATO force could not get rid of in a decade. We are berated for looking out for ourselves in a post US world as though we were a servant while the US itself keeps looking to engage the Taliban in talks. And frankly speaking, what is their crime anyway? They kill because they are killed and their homeland is occupied. Isn’t the first part of this statement the precise reason why the US launched an entire war that has to date killed over twenty times more innocent people in a foreign land that has nothing to do with it than the collective loss of American life in all its wars and natural disasters over the last two decades? It wasn’t a higher ideal that led to this war, just some old fashioned bloodlust. What gives the US military or its government the right to deal so cheaply with foreign lives when it values its own so highly?

The entire social, cultural and political landscape of Pakistan has changed over the past decade due to the war. Yet who is there to account for it? What was once free movement across the four provinces is now limited to only a few select cities. People either move out of the country and take their skills and money with them or they move to other cities and provinces and add to population pressures there with their joblessness. Pakistan’s landscape is changing and it’s only growing progressively worse. An unstable Pakistan means many things for both the region and the world at large. Yet who steps forward, when we ourselves do not take responsibility for ourselves due to our internal differences? How can we expect anyone else to take it?

If this is how ‘favorably’ an educated Pakistani looks at the rest of the world and a supposed ‘ally’ like the US, how favorably would a Pakistani not so well educated perceive things? I leave that to your imagination but honestly, is this really the worst issue here? The greater disdain isn’t the poor man’s, neither is it from the one in no position to bargain. The greater disdain always comes from the man who can practice his prejudices freely, and frankly – if everything is divided into an “us” and a “them” – it’s not us, we just don’t have the luxury. And if this is the milder side of the story, what is the other side like? You wouldn’t know it, but we live in it – we know what it’s like.

In a world so segregated and divided by prejudices, differences and such profound complexes of superiority and inferiority, what “we” can there ever be? There’s always an “us” and a “them”, always a higher political and economic ground and a lower political and economic ground. This is a world where color, cast, creed, religion and economic clout take precedence over humanity, and it is a very real world. How can an ideal such as this hope to survive in such an ecosystem?  What was presented today was just a mild case study (limited by words and requirements), reality is far harsher.

Yes, it is a challenge to talk to someone not wielding the same social clout as yourself as an equal, but is it one that can be surmounted? In the world I live in, unfortunately, that seems highly unlikely.